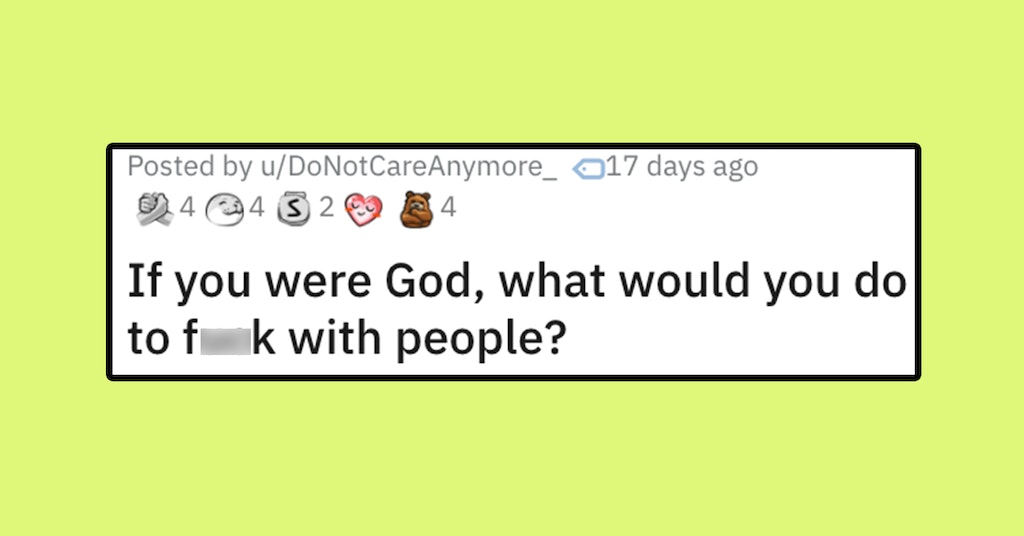 21 Ways People Would Mess With Humanity If They Were God

It probably wouldn’t be difficult for most people to come up with a couple of really awesome ways they would try to change the world for the better if given god-like powers. But throughout all the mythology of various religions, gods spend a surprising amount of time seemingly just messing with humans for no good reason other than boredom and to show off their fancy powers.

So now Redditors are brainstorming ways that they would “f—k with people” if they were God, and the answers are pretty creative. And if you’ve spent any time in religion, some may also be pretty familiar.

Descend on a cloud, say “It’s pronounced Jod” and leave.

“behind you” in an ominous voice

Let their assholes leak all the air simultaneously everyday at 12:00

Give them a list of ten things not to do; let them into Heaven anyway.

I would make everyone see something the wrong color at least once a year.

Nothing too harmful, but I would randomly tinker with things like physics and gravity.

Make everyone the exact same color and speak one language and see what happens.

Constantly call someone, but then hang up right before that person can get to the phone

Ask people on Reddit what they would do if they were God to f—k with people, so I can get ideas.

Stream on Twitch and only respond to the highest donator, Satan would be my moderator

I’d make people’s socks disappear one by one. I’d also burn out the light bulbs in their refrigerators.

whisper ‘I love you’ several times in their ears whenever they’re confused, stressed, irritated, tensed, angry, sad, in other shitty moods.

Make all kinds of fantasy creatures real and have them live secretly among humans or hidden in unexplored places.

Every fifth visitation from the angel Gabriel to earth, I would send him down roaring drunk – I mean absolutely battered

Put them in a paradise, and then putting an apple that’s so pretty and looks so tasty, but if they eat it, they’ll be thrown out of this paradise to suffer forever.

Answer their prayers. No one would expect it and it would create chaos….. The lottery being split between 50 million people would be a real bummer.

Talk to them a whole bunch. Send a kid down there, perform some miracles and just really reinforce that I exist. Then just ghost them for hundreds of years to see what happens.

I would fuck with physics in front of one person like out on a hike or something and then when they try to show it to anyone I would change it back. I would also probably do this to scientists and watch them spend years trying to reciprocate the outcome.