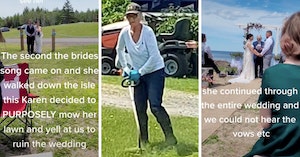 Backyard weddings seem to be gaining popularity as the prices of basically everything continue to skyrocket. Besides, it adds a personal touch to have such an important ceremony someplace that matters to you.

But an inconsiderate neighbor who’s already been slapped with the dreaded “Karen” title didn’t seem to agree with that idea.

Video posted to TikTok by @vampyyric and taken at an outdoor wedding in what appears to be a sprawling yard attached to personal property blasted this Karen for seemingly going out of her way to annoy the group and ruin memories of their special day.

“The second the bride’s song came on and she walked down the [aisle] this Karen decided to PURPOSELY mow her lawn and yell at us to ruin the wedding,” @vampyyric wrote.

Sure enough, even at a distance, the neighbor’s weed whacker can be heard in different clips throughout the ceremony. At the end of the video, she appears to see the person recording and simply keeps doing her thing.

According to the TikToker, they did approach the woman, presumably to ask her if she wouldn’t mind waiting to whack her weeds until after the short ceremony, but it didn’t help.

“She was not kind, not everyone has a reason to be a c#nt some people are just rude like that,” they wrote. “It’s truly unfortunate.”

Most people empathized with the frustrations both the guests and the bride and groom must have felt.

“How sad people can be so miserable to cause such disturbance!!” @howiswilburtoday added.

But a few suggested she was well within her rights, with @jazneh writing, “When you get married outside near houses it’s the risk you are taking, I feel there is more in [the story than] this.”

Of course, what’s done is done, and the wedding party’s time might be better spent thinking up revenge at this point.

“Now I’d be committed to randomly ringing her doorbell at 3am at least once a week for eternity,” @pleasantviewstucc suggested.

“Seed bombs of wheat barly and rye don’t forget native morning glory once it roots it never leaves never ever,” another added.