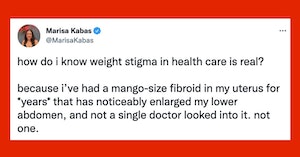 The healthcare system has many flaws, but at least you can pay an enormous amount of money to get no treatment at all. That’s what happened to writer Marisa Kabas who started a viral moment by sharing her horrible healthcare story. Kabas alleges that her doctor left a fibroid to grow in her body because they couldn’t be bothered to look past her weight.

“how do i know weight stigma in health care is real?” Kabas tweeted. “because i’ve had a mango-size fibroid in my uterus for *years* that has noticeably enlarged my lower abdomen, and not a single doctor looked into it. not one.”

Kabas shared more of her story in a thread, saying that she went through years of attempted weight loss, feeling terrible about herself because her belly continued to protrude no matter how much weight she lost. Of course it did, there were a number of fibroids inside! But no doctor would deal with it because they thought she was just overweight.

Kabas had to advocate for herself a lot for other health reasons, including getting two brain surgeries. She says without that experience, she might still not have gotten her fibroids treated.

The comments are filled with people who had similar experiences to Kabas, either also with fibroids or even other health conditions their doctors did not take seriously or investigate because of their weight: