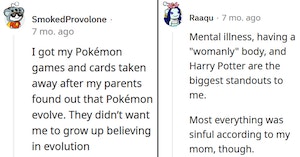 Growing up in a very religious household can be, shall we say, a unique experience, with rules that many of your classmates may not have shared. Evangelical Christians in particular have been known to ban anything that kids consider fun from the home, labeling them as “sinful” because they seemed to brush up against something that the Bible said was bad.

This is such a common experience that one Reddit user asked online people to share examples of weird, mundane, or silly things that were deemed “sins” by their families when they were growing up in a popular thread. Hundreds of people commented to share the ones that stood out to them the most, including prohibitions against Pokemon paraphernalia (because “evolution”), Harry Potter, superhero films, and anything else that included depictions of something like magic.

Music and dancing are unsurprisingly included, but there are also some particularly strange ones like chewing gum, having anxiety or low self-esteem, or even one of the most wholesome children’s shows on TV, Arthur (and not because of the gay wedding). Other items listed were things that are explicitly condoned in the Bible, but it remains unclear how many Christians actually read that thing outside of one or two verses that they really like or are useful for attacking what they don’t like.

This one’s for all the kids who grew up with moms scratching the word “devil” from “devil’s food cake” entries in cookbooks — a list of some of our favorite childhood sins: