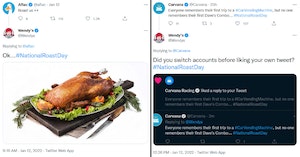 It’s that magical time of year again — the day when the Wendy’s Twitter account will roast anyone and everyone who asks, unofficially known as National Roast Day. Twitter has enjoyed this tradition since Wendy’s invented it in 2018, and it comes as a welcome distraction in the early days of 2022, when everyone is either locked inside or being forced to work during the record-smashing Omicron surge of the COVID-19 pandemic.

Most of the roasts that get the most attention are of other brands, capitalizing on the 21st century phenomenon of private companies interacting with one another on social media as though they’re people. While this practice rapidly became annoying several years ago, as do all marketing campaigns, there remain some exceptions to this rule — and National Roast Day is a big one.

Wendy’s, which has become well-known for its social media presence utilizing a kind of humor popular with today’s youth, will roast anyone who asks on this day, including random individuals. It’s often easier to laugh at brands getting dragged than actual humans with feelings, but the fast food chain’s social media team has somehow managed to respond to every request without getting mean enough to court controversy.

It’s a good crop this year, and the harvest is plentiful. Here are 30 of our favorite roasts: