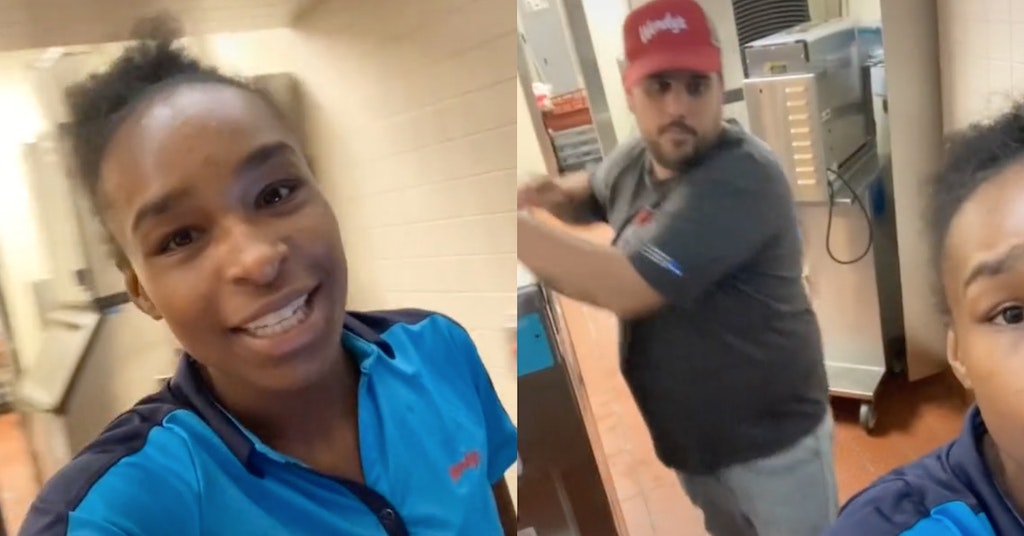 A Wendy’s worker is facing suspension after recording a video of a manager verbally abusing her.

Sophia Monea (@mon3adatmac on TikTok) shared multiple videos of one of the assistant managers at her work acting completely unprofessional, starting off with calling her a b*tch because he didn’t think she had completed cleaning tasks satisfactorily.

“When I tell you to clean, it means to f—king clean, b*tch!” he yells, walking past her in the kitchen. All the other employees in the vicinity can be heard reacting with shock at his comment, and Sophia lets him know she got that on camera.

The manager, Mike, seems completely unbothered that his bad behavior was being recorded. When Sophia tells him she’s going to send it to a higher up and it’s “the end of the road” for him, he simply says “no it’s not” and keeps stomping around the kitchen.

“Look how disrespectful he is!” she says into the camera. “This is how your other managers treat me.”

Another clip shows similarly rude behavior from Mike, as he yells at Sophia from across the kitchen demanding to know what work she’s done. Despite her staying calm and offering up an answer, he gruffly insists she’s lying and calls her a “communist little f—king b*tch.”

Later, Sophia reveals that she turned over the videos and reported Mike for his behavior—and she’s the one who got suspended, pending an investigation.

“Mind you, they did not suspend this man yet,” she says. “They told me that they may not be able to pay me during the whole suspension.”

While the initial video caused a debate online between people outraged at Mike’s behavior as a manager and the same people who always insist that there’s not enough context for a judgment call, Sophia later elaborated that there have been many issues with the behavior of this manager as well as others.

“This is not the first incident at this store,” she said. “There was another manager that is still currently working there who used [the N-word] on the line three times. I told the general manager about it, the general manager went back and told the lead assistant manager…I had also told her about the conflicts we were having with Michael. She also did nothing about it.”

In addition to doing nothing about these complaints, Sophia says this manager at one point called the entire staff idiots in front of the district manager.

“This is the hostile work environment that we have to deal with,” she said.

After the incident went viral, Sophia says Mike finally got fired and she was asked to return, but she still feels as if the roles would have been reversed if the internet hadn’t put pressure on Wendy’s to do the right thing. And she isn’t thrilled that she feels she was retaliated against for reporting Mike to begin with.

“At the end of the day, the problem is systemic. It’s something that I can’t fix,” she said.

Sophia started a GoFundMe when she was told she may not get paid during her suspension and is now considering hiring a lawyer over everything that has gone on.