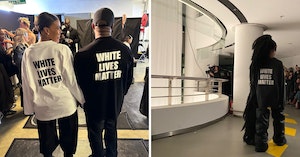 Kanye West, officially now known as Ye, is continuing his gambit to remain relevant by digging into that internalized racism, joining up with far-right political pundit Candace Owens to bring a special message to Paris Fashion Week. Earlier today, West and Owens were photographed together in matching shirts, West in black with white letters and Owens in white with black letters, both sporting the phrase “White Lives Matter.”

This, of course, is a play on “Black Lives Matter” which forgets that nobody needs to declare that white lives are important to our society, because they’re already treated as such. Meanwhile, Black folks are still being disproportionately gunned down by police, who are killing people at a faster rate this year than any before. “White Lives Matter” is also so closely associated with white supremacists that the Anti-Defamation League has classified it as a hate slogan.

But those facts get in the way of the grift, so.

Apparently, the front of the shirt features the face Pope John Paul II along with the phrase “we will follow your example” in Latin. We’re not sure what that’s supposed to mean — are they saying the Pope’s life matters? Because that’s not exactly a subject of debate, even among non-Catholics.

West was reportedly presenting his YZY SZN 9 collection in Paris today, complete with a characteristically bizarre speech in which he called himself “the leader” but didn’t say of what.

“I am Ye,” he said, “and everyone here knows that I am the leader. You can’t manage me. This is an unmanageable situation.”

“People feel like they have the right to come to my face and call me crazy, like it doesn’t hurt my feelings, or like you don’t have to be crazy in order to change the world,” he added.

It remains unclear whether West wants to be called “crazy” or not. Many have quickly dismissed this stunt as another way that the rapper and fashionista is attempting to remain relevant in a world that doesn’t care all that much about him anymore. It’s hard to cash in on shock value in this day and age, where people presenting utterly wild political opinions for money are a dime a dozen.

In spite of the intentionally divisive white supremacist statement on his fairly ugly shirt, West was telling Vogue over the weekend about how inclusive his little fashion show would be, comparing himself to the man most closely associated with Star Wars.

“You know, specifically in this fashion context, I see myself more as a George Lucas than a fashion designer,” he said. “There’s just people. From the same planet. And sometimes, in high school, it feels like we don’t fit in. And in a situation like this, we have the opportunity to come together to express who we are.”

This seems an odd statement from a self-proclaimed Donald Trump ally who proudly sported the MAGA hat and called slavery a choice in 2018, but nobody really expects West’s statements to mean anything anymore.