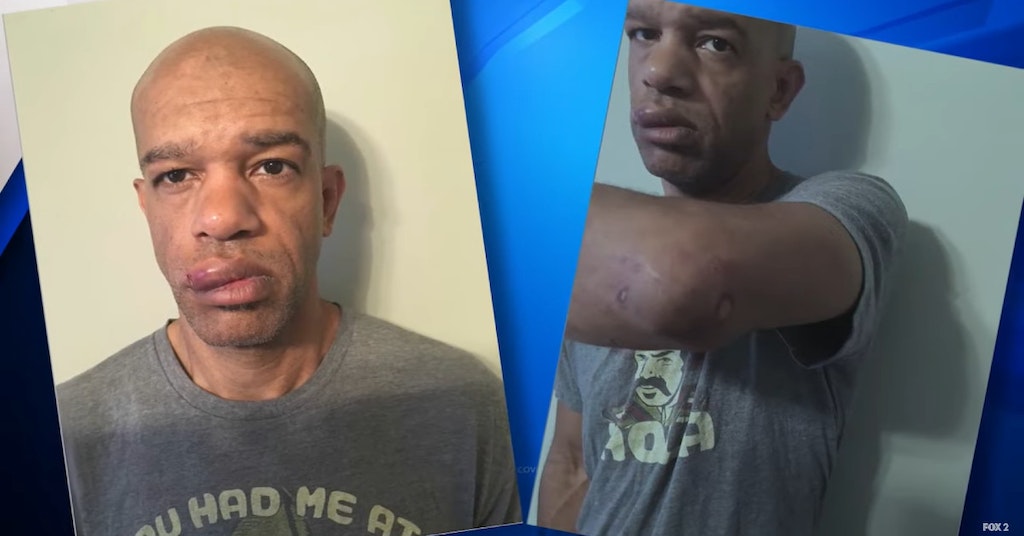 A white St. Louis police officer was found guilty of depriving a man who he did not realize at the time was a fellow cop of his civil rights when he beat him and smashed his phone in a violent arrest at a Black Lives Matter protest in 2017, leaving the Black officer with permanent neck damage. A jury handed down the ruling to former officer Dustin Boone on Thursday, convicting him of a felony that carries up to 10 years in prison.

Detective Luther Hall was working undercover at a protest following the acquittal of the cop who killed Anthony Lamar Smith, shooting him five times through the car window after being recorded saying he was “going to kill this motherf—er.” He was recording the rally with a cell phone alongside another undercover cop, who was white, when they were arrested by SLPD officers who were not aware of their identities. The white cop walked away unharmed, but Hall did not.

Boone’s fellow SLPD officers who participated in the beating and were subsequently fired, Randy Hays and Bailey Colletta, pleaded guilty to the charges against them. Another, Christopher Myers, will likely walk after a jury was unable to reach a verdict on whether he violated civil rights by deliberately destroying Hall’s phone and the evidence of the unlawful arrest and assault that was on it.

The investigation into Boone, in particular, found a history of assaulting arrestees on his record, including bragging about slapping a suspect across the face, texting his fellow officers about how he “got his eyes widened with a little slap from a white boy. lol.” Other texts used racist language up to and including the use of the n-word.

The beating of Hall by Boone and other white cops left the Black officer with damage to his neck that required multiple surgeries to improve, but much of the damage could not be fixed and will trouble Hall for the rest of his life.

Prosecutors argued that Boone and his colleagues expressed a desire to attack protesters before moving to arrest Hall without probable cause. They also pointed out that Boone had attached his own cell phone to his uniform so that his then-girlfriend could watch the protest via FaceTime. Her comments on what she saw of the arrest were illuminating, to say the least.

Prosecutors further argued that Boone married his girlfriend in 2018 in order to prevent her from being compelled to testify against him and prevent these text messages from being used as evidence in the trial. Other text messages by Boone led to him being accused of abusing prescription amphetamines and stealing money.

Hall was awarded $5 million in damages by the city in a lawsuit settlement earlier this year, which might just cover the cost of the initial surgeries on his neck but likely not the pain it will cause him for years to come.