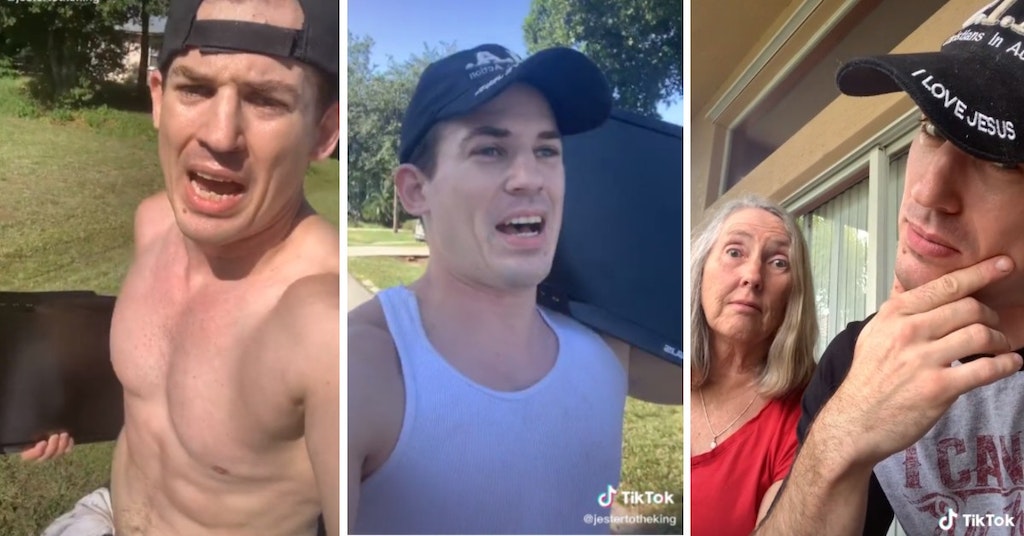 Richard Demsick gained internet fame after posting a TikTok video of himself running two miles through a Florida neighborhood carrying a flat-screen TV in an attempt to look like a thief— without getting more than waves and hellos from local residents.

Demsick made the video in order to press a point about racism in the U.S., where last February 25-year-old Ahmaud Arbery was hunted, shot, and killed by two white men who claimed they thought he was a burglar while he was out for a jog.

#irunwithmaud part two! Really thought I figured it out guys but made it home safe after my 2.23 mile run 🤷🏻‍♂️ #runwithmaud #runwithahmaud #fyp

This best example of a Florida man tried his best to look suspicious and get anyone to call the cops or confront him in any way.

“All right, I figured it out,” he says while running in the video “I’ve got my hat on backwards. I’m shirtless like I’m on some episode of ‘Cops.’ I’m running with a TV. Someone’s going to stop me now, for sure. Cause if not, what was the problem with Ahmaud?”

Demsick jogged 2.23 miles with the TV as part of a movement of people running exactly this distance to represent the date of Arbery’s death, which occurred over two months before the public was made aware of the killing. The two men responsible, Gregory and Travis McMichael, were only just arrested and charged with murder following national outrage and discussions about racist double standards in the U.S.

This video has just got 1 million views. Which is crazy, but what’s crazier is the racial, political, and too often deadly divide between us. The UNITED states of America, has to start listening to each other and … uniting https://t.co/sI6akYmcdc

In statements to Insider, Demsick says that he cried upon viewing the video of Arbery being shot and killed by these men and decided to use his own skin color to demonstrate the extent of white privilege in America.

“I just started crying when I just saw this poor young man running — as I have thousands of times in my life — get shot down,” Demsick said. “Maybe I should run with a TV to show that being a suspicious character isn’t enough that someone should be shot down. Being a white person, that’s just not going to happen to me.” He was right.

The TikTok video has reached over one million views since being posted on Friday. He followed it up with a Mother’s Day video in which he asks his white mother if she was ever afraid for his safety while he goes running or worries that someone might call the police on him, even while carrying a TV. The answer to both questions was a solid “no.”

#runwithmaud #irunwithmaud #runwithahmaud happy birthday Ahmaud. Sad to me I ran today with no fear in a similar neighborhood carrying a TV

“Huh, I wonder why that is,” he says before the two of them lean pointedly toward the camera.

Demsick says the response to his video has been very positive and made sure to point out that there are people out there doing more than making a TikTok video to combat this problem.

“People have been incredibly kind, undeservedly kind,” he said. “There are people who are daily working trying to correct the injustice. I just made a video.”