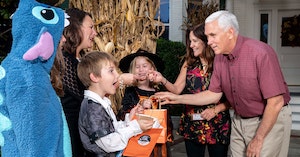 On October 25, the White House hosted a Halloween party at the Eisenhower Executive Office Building, with the usual candy and costumes. It also featured a game where kids were told to help “Build the Wall” with their personalized paper “bricks,” according to Yahoo News. Very Hitler Youth.

The kids involved were the children of high-level government employees and VIP guests, some of whom work with the president, some of whom do not. Presumably, a lot of them were on board with this bizarre exercise that had children metaphorically building a wall to keep other children out of the United States, but a few folks didn’t like it and leaked images of the horrid display.

“Horrified. We were horrified,” one anonymous person who accepted a party invitation from trump told Yahoo News. Each brick featured the name of a child who was in attendance, and at the center were the words “Build the Wall” in large black letters. On the edge of the fake wall were signs reading “America First” which is both a Trump slogan and “coincidentally” a former slogan of the KKK.

They had children "Build the Wall" at a White House Halloween party *next to an openly displayed KKK slogan*. pic.twitter.com/UTBjpylNhY

A number of people are disgusted with the display, like Ben Rohrbaugh, who worked on National Security Council on border security in the Obama administration, who told Yahoo news, “To the extent the wall is just a xenophobic symbol, this is obviously a gross thing to have children do. To the extent it’s a representation of an actual wall on the southwest border, the kids have made nearly as much progress as the president has since 2017.”

This is what teaching hate and division looks like.

This is real, folks. And we need to take a long, hard look at what got us here.

Children were told to ‘build the wall’ at White House Halloween party https://t.co/bFstWmzgdx

The sick and twisted people at the White House had a Halloween party where they had kids build a fake wall for “fun.” Barf.

The White House has not commented on the display yet, but it seems like Trump barely new what was going on at the party, based on this video of him handing out candy on a kid’s head:

He’s the biggest ghoul of all.