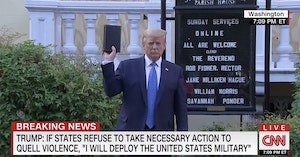 In a moment that will undoubtedly one day be taught in American history classes, peaceful protestors outside the White House were beaten back with tear gas so that President Trump could have a staged photo op in front of a church.

Shortly before Trump began his speech at the Rose Garden on Monday evening, federal police fired tear gas and rubber bullets into a crowd that had been peacefully gathered in the area.

“As we speak, I am dispatching thousands and thousands of heavily armed soldiers, military personnel, and law enforcement officers to stop the rioting, looting, vandalism, assaults, and the wanton destruction of property,” he said, as images of violence — violence we know to be against peaceful protestors — played beside him in many live news broadcasts.

“I will protect you. I am a president of law and order, and an ally of all peaceful protestors,” said the man whose tweets were recently censored by Twitter for encouraging violence against protestors, as his fellow citizens were gassed in the streets nearby.

As soon as Trump finished addressing the nation, the reason for this display of cruelty became clear — the president wanted to cross the street to St. John’s Episcopal Church in Lafayette Square, where the protestors had been assembled, to pose for a photo op with a Bible.

The moment was an obvious attempt to pander to Trump’s ultra-conservative fanbase, at the expense of any pretense of order, compassion, and leadership.

And while many Trump devotees will undoubtedly bite down into this poisonous trickery with all the enthusiasm of a mouse baited into a trap, church leaders have already begun denouncing the surreal moment.

“It served as an instrument of his own forceful presence in the nation, and it did not address the grievous wounds that we are dealing with and the agony of our country. And so it was an abuse of the spiritual tools and symbols of our traditions and of our sacred space,” said Bishop Mariann Budde, who oversees a number of Episcopal diocese, including St. John’s. “He did not consult us, he did not warn us that he was coming across the street to the church.”

Budde also condemned the violence used to clear protestors out of the way to make room for this ridiculous photo.

And she wasn’t the only one.

People also expressed shock over Trump’s speech, which came across as nothing short of a call to violence against protestors demanding that black Americans be treated with respect.

The leader of the United States escalating tensions that were already on the rise, inciting violence against his own people, and throwing humanity aside for a photo op is a phenomenally dark moment for this country.