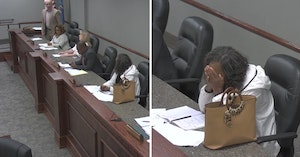 A Republican councilman for the city of Tarrant, Alabama shocked meeting attendees and his fellow council members, particularly the Black members he was addressing, including the mayor, when he dropped the term “house n—-r” during a public meeting. This was in response to criticism from community members over his wife’s various racist social media posts, including the use of the n-word on Facebook.

According to local new website Bama Politics, this is when councilman Tommy Bryant stood up and metaphorically dropped his pants.

“Let’s get to the n-word,” he says before turning to face the three Black people on the council. “Do we have a house n—-r in here?”

The full video of the meeting is still up on the Tarrant city council’s Facebook page, with the argument about Bryant’s wife starting at about the 1 hour and 38-minute mark. By an hour and 41 minutes, he was saying the n-word, pointing in particular to Black councilwoman Veronica Freeman and claiming that Mayor Wayman Newton, who is Tarrant’s first Black mayor, used this term to refer to Freeman in the past.

Whether or not this is true has no impact on whether it’s okay for Bryant to use the n-word, because it’s not no matter what the context. Still, Newton denies the allegation that he used the term Bryant said on camera against Freeman.

“They are trying to expose me for saying something I did not say,” Newton told AL.com. “All of that was a political stunt that they did not do very well.”

Thanks to this particular outburst, which is now spreading fast on social media, people everywhere are learning a whole lot about councilman Bryant and the things both he and his wife like to say about others. Just last month, he said that Mayor Newton reminded him of Adolf Hitler. Also, in the same meeting in which he said the n-word, he made the false and blatantly Islamophobic claim that “Islam teaches to kill non-Muslims.”

Newton has also accused Bryant of referring to him as “boy” during a past private meeting between the two, which everybody who has ever been awake knows not to do to a full-grown Black man, including a 40-year-old mayor. Bryant admitted to this when questioned, saying that “I was trying to piss him off to see if he’d come after me.”

Great to have the 76-year-old version of a 12-year-old internet troll on a city council.

Bryant, naturally, is now facing calls to resign, but has already said he will not be stepping down or apologizing for any of his conduct, saying that he might run for mayor during the next election. He also made the patronizing claim that the only problem with his use of the n-word was that it hurt his target’s “feelings.”

“I understand that people had their feelings hurt with that, but think about this,” he said. “Veronica’s feelings were hurt very, very bad.”

We are thinking about this, in fact. A lot. Especially after seeing Freeman, initially trying to maintain her composure, become emotional and break down sobbing as Newton reads more of the racist stuff that Bryant’s wife has been posting online. Freeman eventually has to leave her chair and can be heard still crying through the door.

When asked by local media if he’s a racist, Bryant said no. Eventually.

What Bryant thinks is the “true meaning” of the term “racist” is unknown and also doesn’t matter.

The official Alabama Democrats have put out a statement explicitly calling Bryant a racist and demanding that he resign.

“Last night, Tarrant City Council Member John ‘Tommy’ Bryant stood up and used the N word at a City Council Meeting. He is a racist and unfit to serve,” they wrote. “He now joins fellow racists and Republicans Rep. Will Dismukes, Blount County Commissioner Dean Calvert as embarrassments to Alabama and the Republican party. All Alabamians should be calling on Republican political leaders like Governor Kay Ivey and US Senate Candidate Katie Britt to demand the immediate resignation of these overt racists.”