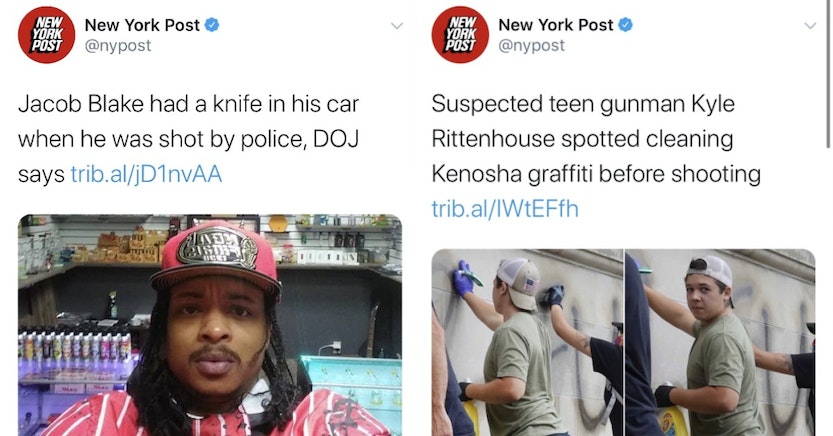 As civil unrest continues to escalate across the U.S., resulting in shooting deaths in Kenosha and Portland, people can’t seem to help but notice the way white shooters such as Kyle Rittenhouse are treated by right-wing media outlets compared to how they treat Black victims of shootings. This is not exactly a new phenomenon, and not even limited to blatantly conservative outlets, but the public appears to be reaching a new level of fed up with it.

Multiple individuals have used the New York Post as an example of this problem, comparing their recent article on alleged murderer Rittenhouse cleaning up some “graffiti” prior to the shooting to multiple articles on Black victims of shootings. The Post has in its archives articles about Trayvon Martin having “traces of marijuana” in his system after he died, and more recently, one claiming that now-paralyzed police shooting victim Jacob Blake had a knife in his car when cops shot him seven times in the back.

Others have pointed out the hypocrisy from right-wing pundits such as Tucker Carlson who have defended Rittenhouse, claiming he went to Kenosha to help maintain “law and order” and shouldn’t be held accountable for his actions. At the same time, these conservative figures are blaming Blake for getting shot seven times in the back because he had a knife in his car, which is perfectly legal.

People, particularly Black individuals, have been pointing out this kind of hypocrisy in the media for many years to the point that there have been multiple studies on this flavor of racism. A 2018 study by the Ohio State University found that Black shooters are 95 percent less likely to be described by media outlets as “mentally ill” compared to their white counterparts, and even when they are, they receive less forgiving treatment.

“Much of the media coverage of white shooters framed them as sympathetic characters who were suffering from extreme life circumstances,” said lead study author Scott Duxbury. “But black shooters were usually made to seem dangerous and a menace to society.”

This issue, of course, becomes even worse when Black victims of shootings receive worse treatment than white perpetrators. The media is also not the only institution guilty of this.

Many have pointed out how Rittenhouse was able to carry an assault weapon down the street after shooting multiple victims while police passed him by as witnesses shouted his alleged crimes to them. Other white mass shooters have been apprehended without injury and treated with kindness by police while Black men like George Floyd, Blake, and many more are gunned down with hardly an excuse.

Blake’s father, Jacob Blake Sr., also pointed out this disparity in a speech to the Get Your Knee Off Our Necks rally in Washington D.C.

“There are two systems of justice in the United States,” he said. “There is a black system and a white system and the black system isn’t doing so well. I’m tired of looking at cameras and seeing these young black and brown people suffer.”