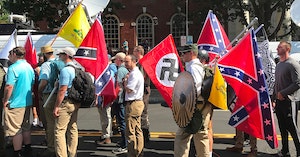 Popular Mobilization (PopMob), a liberal anti-fascist organization in Portland, Oregon, became the ultimate trolls this summer by fooling a group of white supremacists into raising more than $36,000 to support undocumented migrants.

PopMob had asked each of its supporters to donate a nickel, dime, or any amount they could afford for each white nationalist that showed up to a rally held in Portland on August 17.

Several members of the white supremacist terror organization the Proud Boys are wearing the #BlackShirtTanPants combination in Portland today. Take a quick look at that hashtag and see a certain theme pic.twitter.com/cazBzCimVu

While the rally only lasted 30 minutes, during that time, more than 300 members of the Proud Boys, Patriot Prayer, and the Three Percenters—all fascist groups—turned up, netting $36,017.69 in total for PopMob.

In a statement, PopMob insisted that their fundraiser was “in direct opposition to the anti-immigration rhetoric of the far-right and the current administration that emboldens them, showcasing the resilience and strength of a community coming together against hate.

Thanks to @PopMobPDX for helping us raise over $30K for immigrant families!

If you haven't made a donation yet, please click the link to help us defeat hate: https://t.co/2ckrZNClf9

Patriot Prayer is a pro-Trump group referred to as “violent extremists” by the Southern Poverty Law Center. They’ve made a name for themselves by assaulting Abolish ICE activists. Meanwhile, Three Percenters are described as a “far-right militia movement group, and the Proud Boys call themselves “Western chauvinists.” In addition to also loving Trump (notice a theme here?), they are against immigration and very anti-feminist.

All the money raised from the rally was donated to Causa Oregon, an organization focused on Latino immigrant rights that “works at the state and national levels to advance issues that impact the daily lives of Latino immigrant families.”

The rally was directly inspired by a German tactic in which 200 Nazis took part in an “involuntary walkathon” through the streets of Wunsiedel after residents grew tired of their regular marches in the town. In total, they raised over 10,000 euros for EXIT, a charity focused on rehabilitating those with extremist views.

If you can’t beat these people—and to be clear, we need to ensure we do in the long-term—isn’t it great to troll them in such positive ways in the meantime?