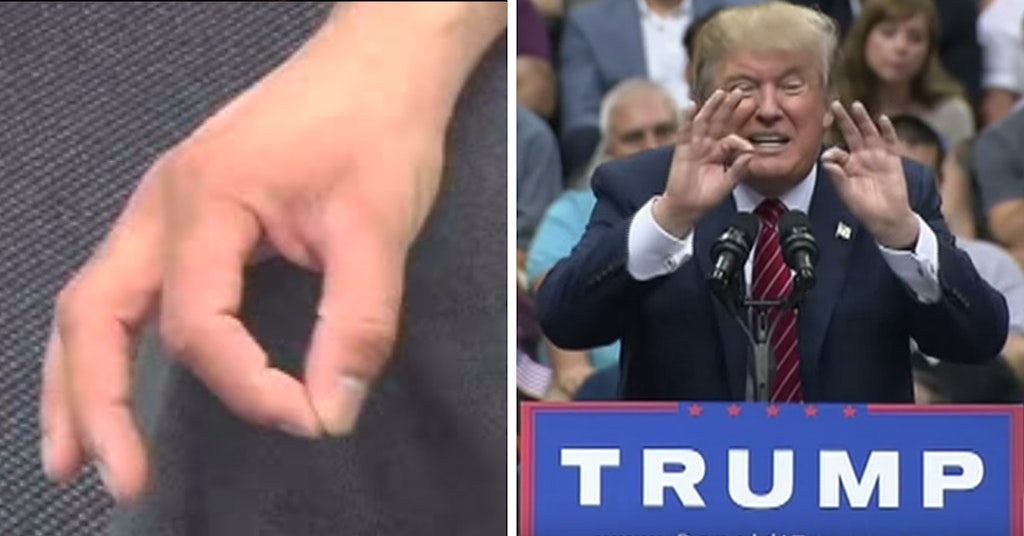 The Anti-Defamation League has released a list of 36 newly added hate symbols to their online “Hate on Display” database including the “OK” hand gesture, bowl-cuts, and a cartoon moon with sunglasses.

The list, which already includes swastikas, KKK robes, and burning crosses, has over 200 entries and was created to help law enforcement officials, school administrators, and others how to identify seemingly innocuous symbols which have been co-opted by hate groups to convey a completely different meaning than intended.

The ADL writes that “a common hand gesture that a 4chan trolling campaign claimed in 2017 had been appropriated as a symbol meaning ‘white power.'”

“Used by many on the right—not just extremists—for the purpose of trolling liberals, the symbol eventually came to be used by actual white supremacists as well. Caution must be used in evaluating instances of this symbol’s use.”

The "OK" hand gesture is now a hate symbol, according to a new report by the Anti-Defamation League.

The ADL says while not everyone means it to be hateful, the sign has been co-opted by the alt-right. https://t.co/lfyemOgR4V

While its use as a hate symbol may not be widely known, it’s worth noting that the Australian man who opened fire on two mosques in Christchurch in March 2019, killing 51 people, used the “OK” hand sign during a court appearance. However, the majority of people who use it aren’t actually using it in such a hateful context.

Anti-Defamation League CEO Jonathan Greenblatt said in a statement, “Even as extremists continue to use symbols that may be years or decades old, they regularly create new symbols, memes and slogans to express their hateful sentiments.”

However, the ADL was keen to note that “because of the traditional meaning of the ‘OK’ hand gesture, as well as other usages unrelated to white supremacy, particular care must be taken not to jump to conclusions about the intent behind someone who has used the gesture.”

The "OK" hand gesture is now a hate symbol. The Anti-Defamation League added the symbol because it is used by white supremacy extremists. Do you agree the "OK" 👌 gesture is a symbol of hate?

The “Dylan Roof Bowlcut” was also added to the database, named after the white supremacist who attacked the Emanuel AME Church in Charleston, South Carolina in 2015. The ADL explained that while many initially distanced themselves from Roof, he’s since become a fringe hero in the movement that younger people have tried to emulate.

“Roof venerators often use Roof’s distinctive bowl-shaped haircut to refer to themselves and like-minded fans. This includes using word ‘bowl’ as part of a screen name such as ‘Bowltrash’ or ‘The Final Bowlution,’ or collectively referring to themselves using terms such as the ‘Bowl Gang” or ‘Bowlwaffen Division’,” the entry reads.

“They may also use slang terms such as ‘Take the bowl pill’ or ‘disrespect the bowl, pay the toll.’ Some use phrases such as ‘take me to church’ or ‘take them to church’ as coded references for violence.”

The "OK" hand gesture has been co-opted by white supremacists — now it's been recognized as a hate symbol by the ADL https://t.co/Tqa7kYVqRw

Mark Pitcavage, senior fellow in the ADL’s Center on Extremism, revealed that the organization is committed to staying on top of the latest hate symbols, saying, “These are the latest calling cards of hate. We pay special attention to those symbols that exhibit staying power as well as those that move from online usage into the real world.”