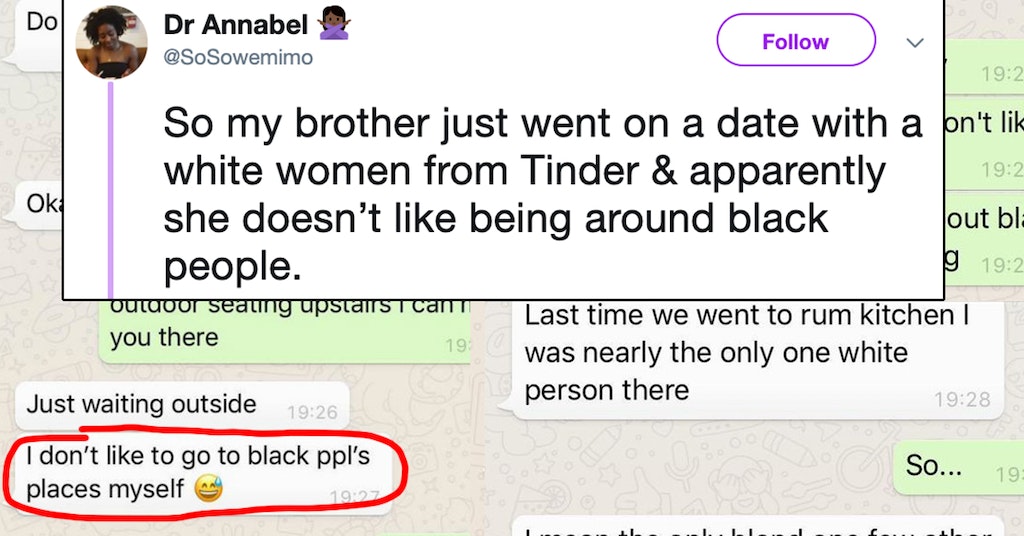 If you ever needed evidence that racism makes no sense, this is it. Screenshots of a white woman’s racist messages to her black Tinder date are going viral and leaving people wondering why she would agree to date a black person at all.

So my brother just went on a date with a white women from Tinder & apparently she doesn’t like being around black people.

While arranging where they would meet for their date, the woman said she would wait outside of the restaurant they were going to rather than getting a table and waiting for him there. She then voluntarily explained that “I don’t like to go to black ppl’s places myself.”

The black man, brother to Dr. Annabel Sowemimo, replied with a screenshot of the woman’s own racist comment with question marks. The woman clarified that she meant “by myself,” but that wasn’t what was tripping her date up.

“That’s. A strange thing to say,” he responded.

“Last time I went to rum kitchen I was nearly the only white person there,” the woman said after saying she would never go there herself. She then seemed to try to walk back her racist statement, saying “I mean the only blonde one few other dark hair ones.”

Either that or she even has a problem with other white people with dark hair, which would put her into full Nazi territory. In today’s world, that’s unfortunately not outside the realm of possibility.

The black man then asked the obvious question: “If you’re uncomfortable about black people why are we meeting.”

“It’s cool we don’t have to meet up then,” the woman responded. “Probably wasn’t meant to be then.”

The black man called his former date’s words and attitude “incredibly rude” and then blocked her. The woman then continued digging her own grave by messaging him on Instagram.

“I think it’s very rude to just block someone when travelling 1.5 hour [sic]. But it’s okay. I wish u all the best,” she wrote. “Probably one of the reasons I prefer to stay away from Nigerians.”

She then moved madder once he cancelled and blocked her. ???? pic.twitter.com/SnL8dHP9XD

So she has a problem with black people, a problem with Nigerian people specifically, and she was still going to drive for an hour and a half to date a black Nigerian man?

After the poor man’s sister posted the exchange on Twitter, people gathered from all over the world to express their confusion, and in the case of many black people, their exhaustion.

This is why I say interracial relationships are NOT and NEVER WILL BE a marker for societal progress. You can date Black people and still be racist. https://t.co/AVLW33cy0B

This woman expresses discomfort at being in black spaces when she is not being oppressed or harassed oh! Just "being around blacks" is a problem but you want to date a black man?? What in the fetishised hell is this mess?! https://t.co/WNXC3BCKcX

Omg shock & horror!! Being the only person of your complexion at an establishment, I could only what such a phenomenon would feel like!! https://t.co/H0dABBnMDI

Let this be a reminder to everyone that white people having relationships with black people doesn’t erase racism.