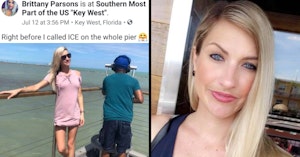 Racists never take a vacation. A woman named Brittany Parsons was in Key West, and instead of enjoying their beautiful beaches and a cocktail, she decided to harass random residents based on her assumptions about their immigration status. Now, people are attacking her and she seems weirdly surprised?

Twitter user @_SJPeace_ shared a few screenshots of Parsons, one of which shows her offensive post on Facebook. In it, Parsons is standing behind a man fishing off of a pier. He seems unaware of Parsons, or maybe he’s just ignoring her annoying presence. She captioned it, “Right before I called ICE on the whole pier.”

Reasonably, @_SJPeace_ was disgusted, writing, “Racist white woman poses next to a brown man then brags about calling ICE THIS IS SO DISGUSTING!!!!! Where does she work?” and asking for retweets of the images.

RACIALLY PROFILING and WEAPONIZING ICE on Brown people who are minding their own business.

This is WHITE NATIONALISM at work.

This is NOT OK

(Also anti-Muslim Laura Loomer is running for Congress. If you don't know a Muslim or have a Muslim friend, you do now. Follow me)

It is a pretty disgusting picture. Parsons looks so pleased with herself! It’s unclear if she actually called ICE, but threatening state violence on other people just because you think they don’t belong in your country is pretty much the definition of racism.

We’re also all well aware of conditions in detention camps at the border and elsewhere. Anyone who would willingly send someone there has a deep disconnect from basic human compassion.

When you get famous on social media for being a racist goblin, people will come for you. Cancel culture is complicated, but Parsons seems to even be enjoying the negative attention, to an extent.

She set many of her Facebook images to private, but left this message public for anyone coming to her page.

Unsurprisingly, Parsons is a Trump supporter with a poor grasp of basic United States history. She also doesn’t really understand freedom of speech. The government can’t lock her up for being a racist—in fact, I wouldn’t be surprised if Trump invited her to the White House. But no one is free from the consequences of saying something someone else doesn’t like.

About 2 weeks before the eventual heat death of the universe. Give or take.

Some other screen caps from Parson’s page indicate she was once a “poly sci” major and a model, considers herself a “princess of god,” and that her family once own slaves, if you can believe it.

Brittany Parsons says she's been involved in politics her entire adult life. Based on her writing skills, that span would be approximately two months now.

“Princess of God.” Shows how highly she thinks of herself. pic.twitter.com/xOTnniyijc

She also has some complicated family relationships:

Based on her social media presence, I’d say Parsons is not well. She’s also not very interesting in herself. But there are a lot of people like her, white men and women who feel empowered by Trump to abuse and oppress others. And that’s what makes her so scary.