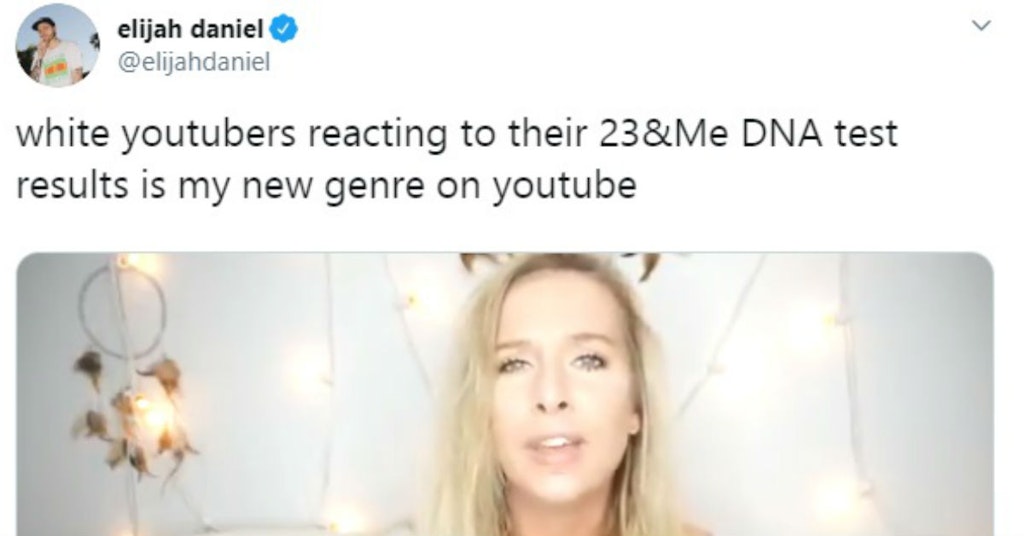 Twitter is having a cringe party today after comedian Elijah Daniel tweeted a video of a white YouTuber who was less than pleased about her 23andMe DNA test results. The woman, who is noticeably pale, dressed in all white on a white couch against a white wall, apparently thought she has some “Asian” heritage and was disappointed to find that she is 99.9% European.

white youtubers reacting to their 23&Me DNA test results is my new genre on youtube https://t.co/evH259fzht

“That is not cool,” says the YouTuber. “They took away my Asian heritage altogether.”

To be clear, 23andMe doesn’t grant or take away people’s DNA. The company merely takes your DNA and analyzes it to determine the ethnic composition of your ancestry. It’s not their fault if you’re really, really white.

“99.9 percent European is what it’s saying now,” she complains. “Tell me that is not the rudest thing you’ve ever heard.”

She is, however, happy to have 0.01 percent Middle Eastern/North African heritage, clapping particularly after “North African.” However, she makes a point to declare that she does consider slavery to be bad.

“Also, side note, I realize that most likely any type of African heritage could have been from slavery, and in which that case, most likely wasn’t from a love,” she says. “Not cool.”

Daniel found this video to be so hilarious that he declared “this now a thread of white youtubers finding out they are white by taking a DNA test.” And there are plenty more to be found.

There are a ton of 23andMe results videos on YouTube, with many of them made by people who look to be pretty white. Most of them are not surprised to find that their ancestry is overwhelmingly European.

“Wow, we are very European,” says user V-Squared before adding in a sing-song voice, “and a little bit African!”

Meanwhile, the woman of the YouTube video that started Daniel’s Twitter thread apparently took the test again and got a slightly less European result at 95 percent, but she was still unhappy. However, she was moved to happy tears to find that the new test found that she is “five percent West Asia.”

SHE GOT HER ASIAN HERITAGE BACK!!! I’m so proud https://t.co/by7GqPRIZx

“I have always wanted to be part Asian,” says the YouTuber. Congratulations?

Not sure what’s funnier, the videos themselves or the Twitter reactions.

what do they expect?? “Your long lost sister is korean and you asian” or smth?

…and for her next video…. pic.twitter.com/XZJCwXHJ3Q

her concealer is white out

Watch her now use chopsticks at P.F. Changs for her no-spice Tofy Pad Sew and say her skills with them have to come from her asian heritage 😬

No, the funniest part of all of this is Daniel’s response to the white supremacists who dropped by to claim that white people are the real victims.

bran? is … is it just bran? did they not finish ur name?? Anyway white people are not oppressed there’s literally old navy stores in every city calm down https://t.co/6YxsJ7hmAE