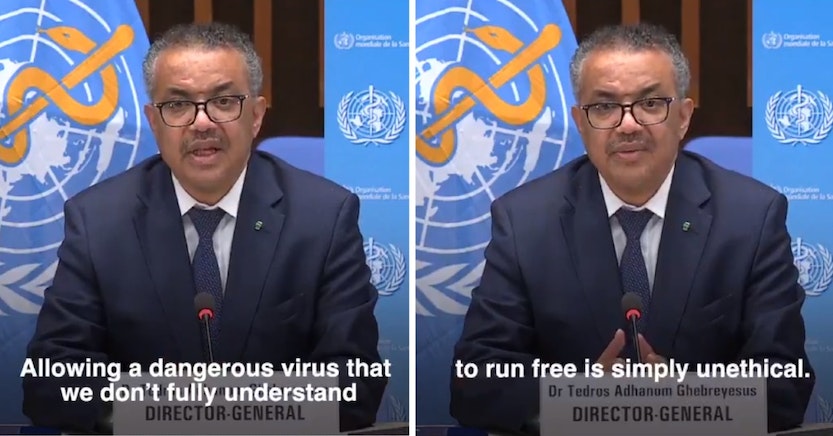 WHO Director-General Tedros Adhanom Ghebreyesus called the idea of a herd immunity strategy for addressing the coronavirus pandemic “scientifically and ethically problematic” during a press briefing on Monday. During his statements, he explained that not only has herd immunity never been successfully used as a pandemic policy, it can’t work by definition, and any attempt to do so will almost certainly lead to millions of unnecessary deaths.

His statements came as the White House appears to be adopting the strategy, if it can be called that, and even promoted a declaration supporting it that was reportedly signed with fake names.

“Never in the history of public health has herd immunity been used as a strategy for responding to an outbreak, let alone a pandemic,” said Ghebreyesus. “It is scientifically and ethically problematic.”

He also accurately explained that “herd immunity is achieved by protecting people from a virus, not by exposing them to it.” Until recently, the term had been used to describe something that happens after the vast majority of the population has been immunized via vaccine from a specific illness.

Multiple public health experts have attempted to explain that even if it could happen by doing nothing to protect people from the pandemic, and it probably couldn’t, such a strategy could lead to hundreds of thousands or even millions more deaths in the U.S. alone.

“Allowing a dangerous virus that we don’t fully understand to run free is simply unethical,” Ghebreyesus added. “It’s not an option.”

It doesn’t help that there was recently a confirmed case of someone coming down with COVID-19 a second time after fully recovering as scientists struggle to understand the new virus. Some people also experience severe and debilitating long-term effects from the illness, likely leaving them permanently disabled.

Meanwhile, the White House has been citing the Great Barrington Declaration, a document supporting a herd immunity strategy that purports to be signed by over 445,000 “concerned citizens,” over 9,000 “medical and public health scientists” and over 25,000 “medical practitioners.” However, upon looking at the actual signatures, Sky News found a number of clearly fake names among these so-called medical practitioners such as Dr. I.P. Freely and Dr. Person Fakename.

On the other hand, plenty of definitely real medical practitioners and public health scientists have come out against the idea of a herd immunity strategy in no uncertain terms.