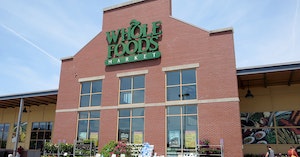 Whole Foods CEO Complains About ‘Socialists…Taking Over,’ Being ‘Muzzled’

Whole Foods CEO John Mackey is making headlines for all the wrong reasons ahead of his upcoming retirement from the company he co-founded.

Mackey went on Reason Magazine’s podcast recently and spent a good chunk of time blasting younger generations and the future, complaining that “socialists are taking over” and bemoaning how nobody wants to do meaningless work anymore.

It sounds like the ramblings of a man who has bought rightwing fearmongering hook, line, and sinker, and his additional comments only seemed to confirm as much.

“I feel like, you know, with the way freedom of speech is today, the movement on gun control, a lot of the liberties that I’ve taken for granted most of my life, I think, are under threat.”

Perhaps it’s Mackey’s upcoming retirement at the end of the month that has made him so willing to speak out against people many have pointed out are likely the majority of Whole Foods’ customer base.

“I can talk about politics more in six weeks than I can today,” he warned Reason, adding that he will be “no longer muzzled” after parting ways with the company.

And he apparently doesn’t mind torching Whole Foods on his way out.

“A lot of people were making as much money, if not more money, not working at all. And so guess what? They chose not to come back to work. They got used to it,” he said, despite pandemic aid actually being extremely underwhelming — and long over — in the United States.

He added that the younger generation “only [wants to] work if it’s really purposeful, and [something] they feel aligned to,” blasting that outlook and insisting meaningful work has to be earned.

“Some of the younger generation doesn’t seem to be willing to pay that price, and I don’t know why,” he said.

Maybe it’s because nobody is entitled to their time and skill? Or because you used to be able to do less meaningful work and at least buy homes or pay rent with it, but younger generations struggle to make a living wage and don’t see the point of giving everything to a soulless corporation for essentially nothing in return?

Unfortunately for all of us, Mackey sounds like he’s going to have a lot more clueless remarks to make as soon as he’s fully cut ties with Whole Foods.