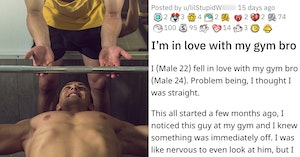 A gym rat who thought he was straight fell hard for his gym bro and turned to Reddit for advice.

First, a little back story: according to the OP, he was at the gym a few months back when he noticed a guy and felt something that he couldn’t quite explain.

Rather than letting it eat at him, he decided to introduce himself and the two hit it off, quickly becoming gym buddies.

At the time, OP was dating a woman who dumped him two weeks into his newfound friendship with Gym Bro. OP had what he described as a “heart to heart where he casually came out as gay.” OP didn’t note anything besides what he described as “that initial offness that [he] felt” around Gym Bro, and it didn’t take long for him to realize that the “offness” that he felt was an attraction.

OP went on in the post, telling the strangers of Reddit how “gorgeous” Gym Bro was, and that he wished he could snuggle, text, and kiss him.

OP said at the end of the post, “I guess this is me coming out as bi…I met a beautiful guy at the gym and we became best friends, I love his personality, he makes me laugh nonstop, and ngl he’s mad thick. I wanna ask him out so bad.”

The comments and Twitter blew up with responses to this heartfelt romantic gym guy and offered suggestions and well wishes, hoping that he would confess to Gym Bro.

One user said, “Im talking about this post with my bffs (one of them is a gym bro lmao) and we’re rooting for you so so much! You got this!”

Another offered tips, suggesting he say, “Hey bro remember that time I was mirin’ and said ‘no homo’? I’ll have to take that back. No, not the mirin’, the other part …”

There was an overflowing of support and good luck posts, with people telling OP that they were constantly refreshing to check for updates.

Bolstered by the strangers of the internet, OP updated the post that he was going to ask out Gym Bro once he got off of work and to the gym.

“Update: at the gym rn, we’re gonna do our sets and when we leave ima walk him to his car and tell him. Thanks for the courage everyone!”

People were sitting at the edge of their seats, waiting to hear what Gym Bro said, and they weren’t disappointed when the update came!

“update 2: I’m f—king crying in my car rn holy shit. He said yes,” OP edited the post to say. “So I walked him to his car and I told him. And bruh…the way I couldn’t speak lmao I was so nervous. But basically, he said he kinda thought I was into him cause ‘I can only catch you respectfully staring at my butt so many times before it’s a little sus’.”

Gym Bro had OP there. The update went on, “But I told him that I’m bi…and we’re going on a date Friday. But like bruh…he looked so flustered and cute when I told him…he had the prettiest smile lmao.”

OP ended the post with the news everyone was hoping for, saying, “But anyways…I guess we’re a little more than just gym bros now…I seriously couldn’t have done this if this didn’t get so much random ass support lmao. Anyways…I’m f—king shaking…I actually did it…bruh I love him so much…so so so f—king much. Thank you for the support!”

Best of luck to OP and Gym Bro on their first date and future together!