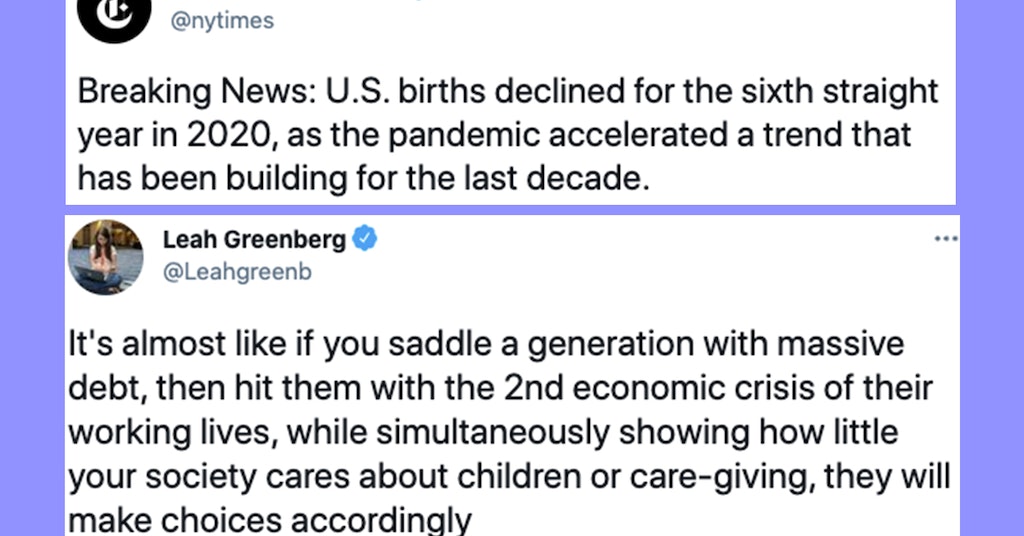 A recent report that the birth rate has continued to decline in the United States has prompted some strong responses.

Centers for Disease Control data released on Wednesday shows 2020 births have declined for the sixth year in a row, despite many expecting a sort of baby boom to start nine months after many Americans began spending more time at home thanks to the pandemic.

A New York Times article on the subject offers up a number of possible reasons—better access to birth control, economic uncertainty, women simply choosing to have kids at a later age—but most coverage of the report seems to paint the decline as largely negative.

A headline for The Washington Post jumps right to “how other countries have tried to persuade people to have more children.” The Associated Press seems to blame pandemic anxiety. NPR stresses how there aren’t enough babies being born “for a generation to exactly replace itself.”

And this is nothing new. As mentioned, this is the sixth year the birth rate has declined, and older generations have been lamenting it the entire time, making it just one of many disappointments they blame millennials for.

Never mind that plenty of humans are still being born—it’s not like America is going to run out of babies any time soon. More than anything, it often seems like the dismay over the dropping birth rate is linked to frustration with how norms and tradition are changing, and people are less inclined to do things just because it’s the way it’s always been done.

In reality, as the gap between the wealthy and the rest of us continues to widen, it becomes more and more difficult to have children. And rather than simply continue on with tradition, would-be parents are having to consider whether it’s responsible to bring children into the world if they can’t adequately provide for them.

Of course, even if the U.S. did act like the #1 country in the world people sticking their heads in the sand constantly claim that it is and make having children more affordable for parents of all economic backgrounds, there are still plenty of millennials—and soon, Gen Z-ers—who will still choose not to have any. And that’s just fine.

So yeah, we may not get another “baby boomer” generation, one way or the other. But it’s not necessarily a bad thing that some people have realized they can contribute more to the world or be happier without raising a child. But for those that want to, we have to make it a whole lot easier for them to do so without going bankrupt or giving up their entire lives to do so rather than shaming them for crunching the numbers and making the fiscally responsible choice to wait.