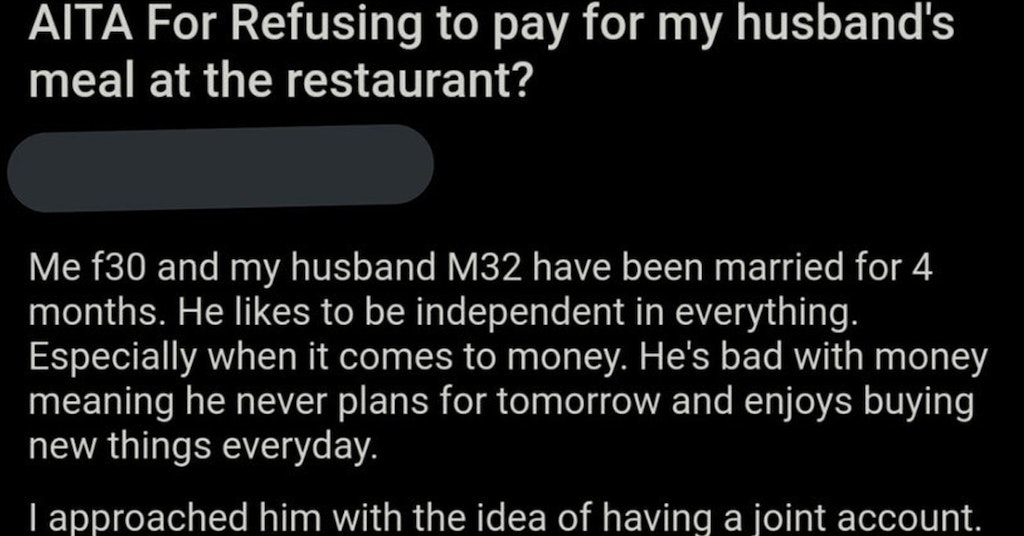 If everyone spoke to their future spouse about finances before getting married, half the posts on r/AmItheA–hole and r/relationships wouldn’t exist. I guess it’s to our entertainment benefit that they don’t, but it does seem like a net loss for humanity.

Redditor u/420BAGIRL did not have this conversation before she married her husband—and it’s pretty much tanking their relationship.

She asked, “AITA For Refusing to pay for my husband’s meal at the restaurant?”

The question out of context might elicit a “yes” from most of us. There is quite a bit of context though. She says they’ve been married for four months and has discovered (?) her man is bad with money and “he never plans for tomorrow and enjoys buying new things every day.”

“I approached him with the idea of having a joint account,” she continues. “And he said okay. But sadly he took it as in his salary was doubled up and kept purchasing stuff that is expensive without evening running it through me. It was just like grab money and go spend it. Not okay because we have commitments.”

Okay, this is where the OP lost me a little bit. If you know the man is irresponsible with money, why open yourself up to this nonsense? By nonsense, I mean theft.

She says they had a talk and he told her he didn’t have to account for spending their joint money because “technically…it’s his money.”

She didn’t murder him on the spot, but they did agree to separate their money again. They still split bills, but their “extra” money is theirs to do whatever they please with. Then this happened:

Last night he suggested we go eat at a restaurant. I assumed each of us pay for our own meals. We arrived and he ordered more dishes than me and two types of desserts. When it was time for paying. I asked the waitress for separate bills and my husband looked confused when he heard. He said “You’re not gonna pay for my meal too?”

I told him it’s his decision that each of us pay for everything ‘individually’. Told him this is what separate finances means. He got upset saying he spent all the money he had before coming to the restaurant and didn’t think I’d actually decline to pay.

So it’s fair that I pay for dinner? After he argued and threw a fit I just paid for my meal and was about to leave when he called me selfish and mean.

He came home 2 hours later telling me his buddy came and paid for his meal no problem. He said I shouldn’t have declined to pay for his meal and was being mean to him.

I told him to not take his misplaced anger out on me but he still argued with me about what I did and how unacceptable it was.

After that I took some time to calm down. We had a talk this morning and when I suggested therapy first thing he said “Okay, But who’s paying?” Then reminded me of what I did and how unacceptable it was. He keeps bringing it up and wants me to apologize.

She added, “In case our jobs are relevant: I’m a secretary and He’s a Police Officer.”

A lot of people did seem to think it was relevant that a man with no impulse control and childlike anger was a police officer. Most commenters understand why the OP did what she did, though they thought it was a major inconvenience to the waitstaff, which sucks.

The other criticism was basically, “Why did you marry this guy?”

People don’t change overnight when you marry them, especially in relation to how they spend or save. Please, talk to the person you want to attach your life to, because their bank accounts come with them. Otherwise, next thing you know, you’ll be abandoning your spouse at a Chucky Cheese.