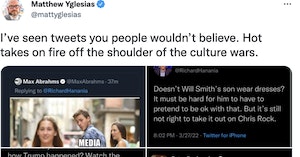 The Oscars took a surprising turn last night when Will Smith jumped on stage to smack Chris Rock in the face after the latter made a crack about Will’s wife.

Chris was gearing up to present an award when he called Jada Pinkett Smith out from the stage, saying, “Jada, love you. G.I. Jane 2, can’t wait to see it. Alright?”

Jada has been open about her struggles with alopecia, and how that led to her cutting her hair rather than losing handfuls of it at a time. She was seen rolling her eyes and looking annoyed at the joke, while her husband initially laughed.

But when the cameras cut back to Chris, Will walked right up on stage and smacked him in the face over the joke.

“Will Smith just smacked the sh*t out of me,” he said, laughing but clearly more than a little stunned.

“Keep my wife’s name out your f—king mouth,” Will called out after he walked back to his seat.

Chris wasn’t the only person stunned after Will retaliated on behalf of his wife. It became pretty much all anyone talked about for the rest of the night.

On the one hand, you had the Twitter jokes coming on down.

There was also, of course, a lot of serious discussion surrounding the interaction, from frustrations over Chris making fun of a Black woman with a medical condition on a public stage to condemnations of Will for enacting violence as a solution to something he took issue with.

And this likely will be one of those extremely online conversations that continues happening for at least more than a single 24 hour news cycle.