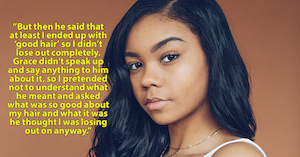 One way to deal with racism to make the racist realize the language they’re using or the joke they’re making is not funny. And you can do that by asking question after question, forcing them to trip over their logic and understand how inappropriate and wrong they are acting.

One Redditor who is biracial used that tactic to get her step-sister’s boyfriend to admit that a joke he made about black hair was racist. Her sibling is now mad that the OP made her boyfriend feel stupid — but the only thing stupid is making racist jokes.

“I (18f) live with my dad, his wife Hannah, Hannah’s daughter Grace (20f), and our younger brother (8m). Grace really only comes to stay on the weekends since she’s in college, and this time she brought her boyfriend Issac (21m) with her,” the OP writes.

“I’m biracial, my dad is white and my mom is black. Honestly I don’t look anything like my dad so most people don’t even think I am mixed. We like to joke that I got his personality instead of his looks.”

“People tend to say offhanded stuff to me about how I don’t look the way they think I’m ‘supposed to.’ I’m kind of used to it especially since my dad ended up married to a woman that is also white so like every time I’m with them it obviously looks like I’m the odd one out. I’m not afraid to correct people, but sometimes that gets exhausting and I’ll just play dumb instead.”

“Grace and I had planned to get lunch together and her bf Issac ended up coming along with us. She wants him and I to get to know each other better since she really likes him, so I figured that’s why she brought him. While we were having lunch, my mom’s side of the family was brought up, and then Issac said that it must’ve been a shock to my dad at least for me to end up so dark since most mixed kids are lighter in complexion than I am. But then he said that at least I ended up with ‘good hair’ so I didn’t lose out completely.”

“Grace didn’t speak up and say anything to him about it, so I pretended not to understand what he meant and asked what was so good about my hair and what it was he thought I was losing out on anyway. He got flustered and said ‘well you know…most girls with your skintone have curlier hair.’ So then I asked why he thought my hair was good just because it wasn’t that curly. He said he felt it just looked nicer. So I asked why he thought that textured hair didn’t look just as nice. He kept blubbering out excuses and digging the hole even deeper for himself, and finally Grace told me to cut it out and leave him alone.”

“I paid for my part of lunch and left after that. I didn’t tell my dad or Hannah what happened, but it’s obvious enough that Grace is mad at me. My dad asked that she and I solve whatever the problem is, because he hates seeing us be so tense around each other.”

“Grace ended up telling me that she was pissed because I made her boyfriend look like a jerk by playing dumb. I told her that I didn’t have to make him look like a jerk because he already was one, but she said that I drew the problem out more than necessary and made it worse than it needed to be when I could’ve just told him that he f’ed up. I mean I could have done that, but I don’t think it should be my job to, and plus I feel like it was probably more effective to get him to explain his logic out loud rather than have me tell him he was being a jerk. Grace is insisting that I should have just told him point blank, and bc I didn’t, she thinks I’m an AH.”

I mean, the OP just basically made the boyfriend explain that he is racist.

“Hi there. I am also biracial (black and white) and was raised by my blond haired blue eyed white mom. So i can empathize with having to deal with very frequent micro (and sometimes macro) aggressions. Playing dumb is often the most effective way to get people to comprehend their own prejudice. Grace is angry because she has to either admit she is willing to accept that her boyfriend has these beliefs (unfortunately common for people to think this way), she and her boyfriend may both need to work on their own beliefs, or maybe end things (? Probably not unless this was a tip of the iceberg comment),” said

“NTA and well done. Isaac was being racist, and he made himself look bad,” said

“NTA. You did him a big favor by humiliating him and forcing him to reflect on his racism. If you’d called him a jerk he could’ve just got mad at you and moved on. You dragged it out and he’s going to keep feeling it. Maybe it won’t change him, but there’s a chance that it will. You don’t owe him anything, but you went above and beyond in giving him an opportunity for personal growth. Whether or not this was your intent, you were exceedingly generous. Hopefully he learns from it,” explained

“The ‘good hair’ is some racist sh*t. He knew what he was saying, and he knew it was racist. He just couldn’t admit it because while he’s happy to be casually racist, owning it makes him feel bad, and we can’t have that, can we? NTA. It’s bad enough that casual strangers feel ok being racist to you. Having somebody you’re close to bring one to lunch, that just sucks on a while other level. Keep making them explain their ‘jokes,'” suggested