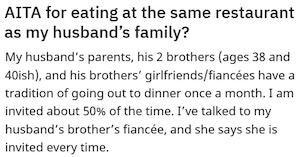 An entry in the famed “Am I The A–hole” forum on Reddit has gone viral for not only depicting a situation in which the OP is clearly not the jerk, but for a surprise ending that was probably not so surprising for people of color. The Reddit user explains that she was accused of bad behavior when she decided to take herself out to the same restaurant that her husband was eating at with his family after she wasn’t invited to dinner — and it wasn’t the first time she was snubbed.

“My husband’s parents, his 2 brothers (ages 38 and 40ish), and his brothers’ girlfriends/fiancées have a tradition of going out to dinner once a month,” she wrote. “I am invited about 50% of the time. I’ve talked to my husband’s brother’s fiancée, and she says she is invited every time.”

It’s immediately suspicious that this one family member gets left out of half the monthly dinners when everyone else gets invited every time. It gets worse when even her husband won’t explain why this happens, and it’s pretty understandable why she decided to do something about it.

“When I say I’m not invited, I mean that my husband tells me ‘I’m going to the family dinner. It’s probably best if you sit this one out.’ When I expressed that I wanted to come, he told me that it would be for the best if I didn’t. It has caused several fights.”

While some might describe her course of action as mildly petty, it was a fairly non-confrontational way to bring attention to the issue and how weird it is that she’s the only one being left out of these dinners. With her husband refusing to provide any answers to these consistent family snubs, there was little left to do but show up at the restaurant for her own personal meal.

“About a week ago, my husband went to a family dinner that I wasn’t invited to,” she continued. “I was very pissed. So earlier that day, I called and made a reservation at the restaurant they were going to. My husband left the house, not knowing about my reservations, and I left 15 minutes after him.”

“I ended up seated at a table where I couldn’t see his family. So I got up as if I was going to the bathroom and walked right past them. They were all there, including his brothers’ SOs. My husband looked completely shocked and asked me what I was doing there. I told him that I had just been dying for a steak, so I came and got one at the restaurant.”

This, of course, upset everybody, but the OP rejected accusations of rudeness by pointing out that she was only going to the bathroom, wishing them a nice dinner and leaving them alone. When she got home, her husband was very angry and began tossing around the ol’ a-word.

“My husband was really pissed when he came home, and he told me that he couldn’t believe how much of an a–hole I had been. I said that he was an a–hole for not inviting me to his dinners when his brothers’ SOs got to go. My husband said that the decision to invite was between him and his family, and I should respect it.”

By now, you’re probably wondering what the reason is for the family leaving this woman out of the monthly family dinners half the time. A good portion of the population, however, had probably guessed the answer. After one Reddit user asked, the OP revealed that she is the only person in the family who is not white.

“I am half black, they are all white,” she said to the commenter who asked. “But I don’t know that that’s why they act cold toward me.”

She might not know if racism is the cause of this whole issue, but other people of color do. Either way, many feel that this kind of treatment is grounds for divorce.