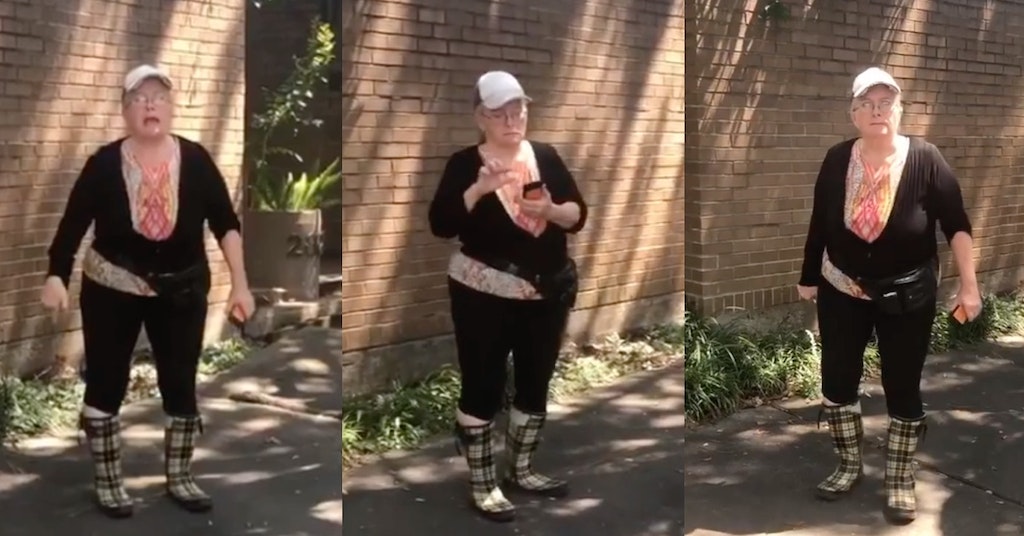 A white woman in Houston is looking like a fool after calling the police on a Black census worker who was standing at her neighbor’s door.

An Instagram user by the name of @zeaky_bobby uploaded the video to his page over the weekend, as he said he was waiting for Houston police to show up to the scene.

“Anglo Saxon woman called the police on me for not bothering her,” he wrote. “So, we gonna wait! If I don’t post a follow up that probably means Karen was successful and the police shot me like they popped that mentally ill kid 21 times.”

The four and a half minute long video starts with the woman already telling him that he needs to leave because he has no reason to be in front of her neighbor’s house, though apparently she has every reason to decide who is or isn’t in front of other people’s houses. And, of course, she immediately jumps to declaring that she’s going to call the cops.

“You calling the cops ‘cause I’m Black? Is that what it is?” he asks.

“No, because you’re in front of my neighbor’s house, and you need to leave!” the woman demands. “Because you don’t have a reason to be here.”

The man immediately challenges her assumption but refuses to answer her delayed question as she finally thinks to ask what he’s doing there. So instead she returns back to her phone and hypothetically calling the police.

He waits through the entire phone call, even providing her with a detailed description of his build and clothing. As he stands still, farther away from her than he was at the beginning of the video when she approached him, the woman informs the 911 operator that he’s “walking towards” her in a “threatening” manner.

A subsequent, much longer video shows that the police did finally show up, although @zeaky_bobby says it took two hours and they said the woman didn’t actually call them.

“But that’s not what the operator mentioned,” he wrote. “They told me they already had a call from this area but couldn’t give me any arrival details.”

After the video began circulating online, other census workers pointed out that they are easily identifiable by their badges, bags, and a sign on their car, so there’s no way this woman didn’t know what @zeaky_bobby was doing in the neighborhood.

But the entire situation is too familiar at this point.

As The Root’s Zack Linly points out: “In a Karen’s mind, a Black person who refuses to submit to what they think is a reasonable line of questioning indicates that the Black person is guilty of something…Meanwhile, Black people subscribe to much simpler logic: We ain’t got to tell you sh—t.”