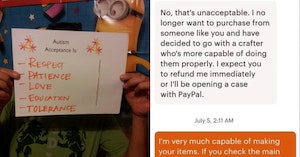 An interaction between a customer and a maker of custom mugs has people desperately hoping that it’s fake, because that’s better than believing that human beings can be this awful to one another. The text conversation shows a woman requesting that her order be canceled but being denied because the artist had already begun the process of making her mug.

This doesn’t go over well with the customer, who says that she doesn’t want a mug from “someone like you.” As the woman for some reason reveals, the “like you” refers to the fact that the creator is autistic. This landed the interaction on Reddit’s “Entitle B—h” forum.

“I no longer want to purchase from someone like you and have decided to go with a crafter more capable of doing them properly,” the woman writes. “I expect you to refund me immediately or I’ll be opening a case with PayPal.”

The artist, naturally, pushes back on the idea that they would be incapable of making a mug as they had done literally hundreds of times before.

“I’m very much capable of making your items,” they explain. “If you check the main page on my shop, you’ll find that I’ve had over 300 sales and a 5 star rating.”

“I’m not sure why you would think I wouldn’t be able to make these items.”

The customer, apparently unfamiliar with the screenshot function, then fully confesses that she went on the creator’s Facebook page and discovered that they are, in fact, autistic, and reveals that she knows nothing about autism.

“My neighbor’s son has that and after observing his behaviors, I do not believe anyone with the disease would be able to properly make these mugs,” she says.

The artist correctly points out that autism is classified as a spectrum disorder, meaning that you cannot possibly “observe” one autistic individual to determine what it looks like for everyone. In fact, a growing community of autistic people have pushed back on the idea of the condition as a “disease” or disorder and have embraced it as a welcome part of themselves.

The only thing that causes problems is negative stereotypes that result in customers so terrible that they would say something like this:

Thankfully, commenters overwhelmingly support the creator and agree that this is a case of severe entitlement, not to mention ableist bigotry. We all hope that woman did not get a refund and that a little liquid goes down the wrong pipe every time she drinks from a mug.

“Damn. That’s one post I really hope to be fake,” said the top commenter. “How low can you get?”

“This really pisses me off, people with autism and other conditions with a stigma attached don’t deserve this,” said another user. “Life can be hard enough without ignorant people f—ing things up for people.”