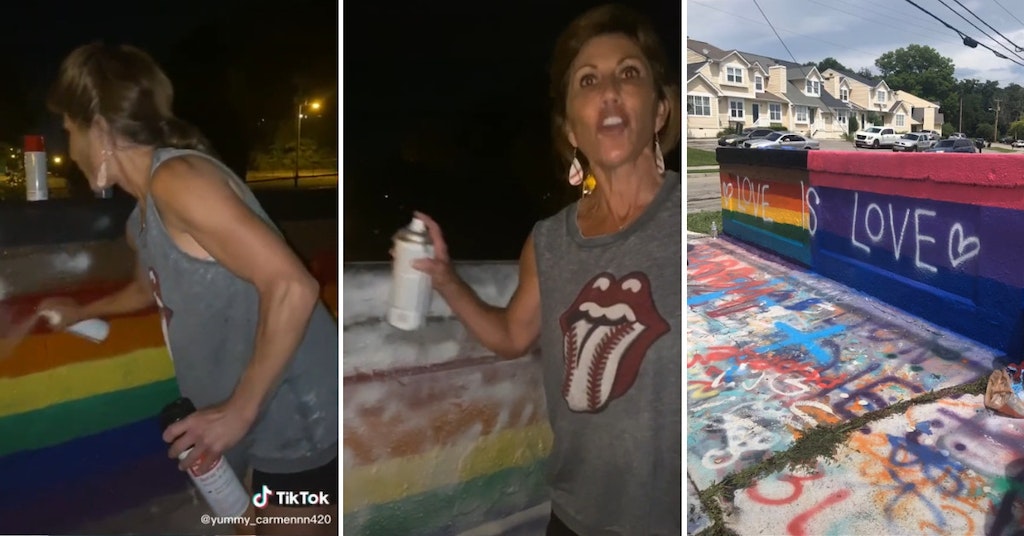 Multiple videos of a homophobic woman painting over a Pride flag mural (with white paint, of course) while accusing LGBTQ+ people of the crime of wanting to “stand out” and accusing the kids filming her of not paying taxes have gone viral online. The Tennessee woman has earned the title of “Karen” for her actions and resulted in the local community coming together to repaint the mural along with the entire sidewalk in front of it as people gathered to celebrate love and reject hate.

The videos, originally posted on TikTok by 16-year-old Carmen, have been taken down by the platform for “review” for some reason, but at least two of them survived to land on Reddit where everyone can hear the woman show her bigotry to the world.

As she starts to spray the mural with her white spray paint, notably starting with the black and brown stripes, she claims she has a “right” to do so because she pays taxes.

“I have just as much right as you, actually I have more damn right, because you know what? I work, I pay taxes, I’m an American, born here,” she says.

Judging by this statement on her “rights” and Carmen’s other videos, the 16-year-old may have been a little too brown for her, as she seems to assume that the kid wasn’t born in the U.S. in spite of her having no recognizable accent and, as Carmen points out, speaks better English than the Karen.

“I’m sick of you all’s s–t,” says Karen. “Y’all are just constantly, it’s constantly something, always trying to stand out, make a big freaking scene, if y’all would shut up…”

“We’re making a scene?” asks one of the teens, incredulously.

Human beings? Wanting to express themselves? Not in Karen’s town.

The teens try to point out that the bridge walls around them have been painted with Pride flag colors for years, and then Karen further exposes her blatant homophobia.

“Why, y’all like each other? Are you confused?” she asks them.

“Yeah, this is my girlfriend,” says Carmen.

Though part two seems to be missing, Reddit was able to post the third video in the series in which Karen continues to make herself look worse.

As this video starts, Karen seems to be in the middle of ranting about how great of a mother she is, because her kids “eat food” and aren’t always “on the computer.” The teens then point out that her own kid didn’t seem too keen to be around her in this particular moment.

“Your kid was embarrassed to be with you,” said Carmen.

“No, he said ‘I rolled my window up because I didn’t want to say anything,'” Karen countered.

“Girl, what?” said one of the teens, which is pretty much the perfect response.

After trying to find out where Karen works, she gets back on her “right” to deface the mural and saying that she pays taxes.

Regardless of age, anyone who works at a place of employment pays income taxes as well as Social Security and Medicare taxes, not to mention the sales taxes everyone pays any time they make a purchase that isn’t cold, non-prepared food. But suddenly, Karen thinks “it doesn’t matter!”

It’s unclear exactly how the night ended between Karen and the teens, but their videos of her actions and words resulted in a beautiful local gathering and repainting of the murals to make them better than ever.

In addition to the gay and bisexual Pride flags, pansexual and trans Pride flags can be seen painted across the street with the message “love is love.”

If that’s not good enough news for you, the “Karen” also appears to have been identified as Tabitha Dardeau Travis, and Twitter users have claimed that her workplace is taking the complaints against her quite seriously.