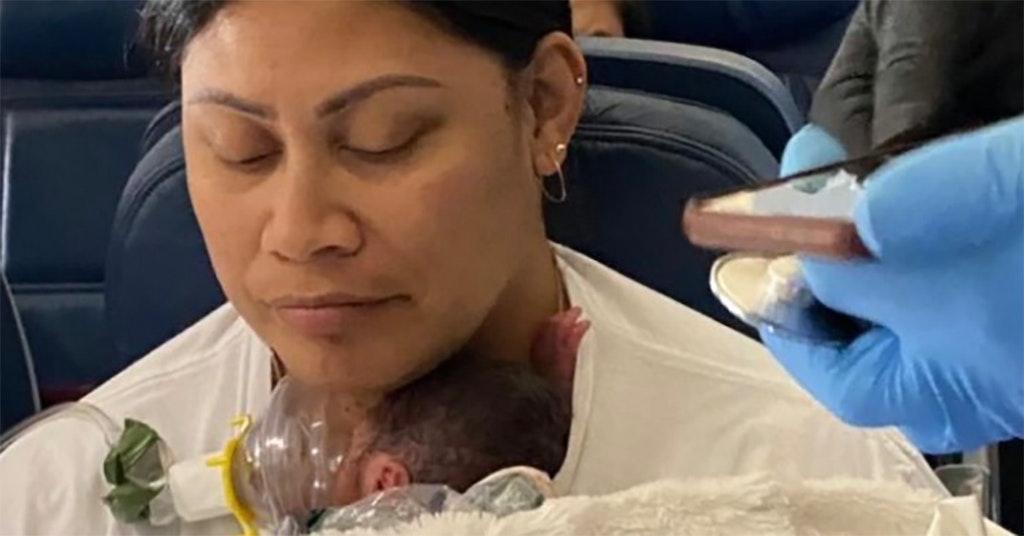 Woman Gives Birth On Plane Flying Over Pacific Ocean, And There’s A TikTok

A woman gave birth on a plane last Wednesday en route from Salt Lake City to Honolulu, and there’s a TikTok video documenting the incredible event.

The TikTok video, posted Friday by Julia Hansen, has racked up 13 million views as of Monday morning. In it, Hansen begins by marveling, “A baby was just born on this plane.” The video also includes the pilot intoning over the plane’s PA, “Nice round of applause for the mother” in addressing the unusual mid-flight commotion.

The video also includes medical personnel entering the plane and wheeling mother and child down the aisle.

The Washington Post did some digging on the story behind the TikTok, reporting that Hansen and her friend Siearra Rowlan, both 23, were on the Delta flight where the baby boy was born.

“Everybody’s kind of turning back to see what’s happening, and then there’s a lot of shuffling between flight attendants,” Rowlan told the Post. “The speaker goes on and off like they’re about to announce something but they don’t. Then there’s a little baby crying.”

Delta doesn’t prohibit pregnant passengers from flying, though its website advises, “If you’re traveling after your eighth month, it’s a good idea to check with your doctor to be sure travel is not restricted.”

In a follow-up video, Hansen addressed one of the most frequently asked questions in her comments: Why the woman was flying if she was about to give birth?

Hansen said that she was seated next to the parents of the new mother, and her father asserted she had no idea she was pregnant. “It was a complete surprise pregnancy to everyone!” Hansen remarked on her TikTok account. “She wouldn’t have flown on the plane if she knew, but she had no idea.”

She linked to the family’s GoFundMe page to support the mother and new baby, who according to the fundraising page, is named Raymond Kaimana Wade Kobe Lavaki Mounga. The two of them will be staying in Hawaii until the baby is able to travel.

People also wondered whether the baby would be considered an American citizen or how to do a star chart for the baby; the Post did some digging into that question as well.

Centers for Disease Control and Prevention spokesman Scott Pauley said via email, “If a birth occurred en route, that is in a moving conveyance (e.g., an airplane) the place of birth becomes where the newborn was first removed from the conveyance, or in this instance, the airplane.”

Though the video’s clearly captured many people’s imaginations, Hansen notes that the other passengers went about their business once the mother and child were off the plane.

“It really didn’t take much time at all,” Hansen told the Post. “After she had gotten out, everyone just kind of got up, got their carry-on and left.”