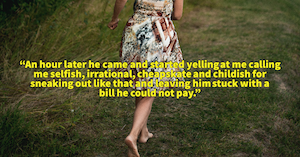 Woman Sneaks Out Of Restaurant After Fiancé Tells Her To Pay For His Friends’ Meals, Asks ‘AITA’

Financial abuse is a very real way for partners to exert control. It’s insidious and can seem like “equality” until it becomes clear there is nothing equal about it.

One Redditor thinks she might be overreacting by sneaking out of a restaurant after her fiancé asked her to pay for his and his friends’ meals — but it quickly becomes clear that this is a situation where financial abuse is taking place, and Redditors are advising this OP to run, run, run even further than out of a restaurant.

“Several times he has tricked me to pay for his and his friend’s meals by asking me publicly. Let me say that I’m too nice to say ‘no,’ I hate confrontation especially when we’re at a public place like a restaurant so I just grin and pay. Last Tuesday, he asked me to join him and his buddies for dinner. I told him from the start I wasn’t paying for their food and he shouldn’t expect me to. He said he ‘got this’ and ‘no worries.'”

“We got to the restaurant. Met his friends, ordered food. And in the middle of the meal he leaned in and whispered that I would be paying for everything he and his friends ordered. I got so mad I whispered back ‘noooo’ but he probably relied on me not causing a scene in public and infront of his friends. He said ‘you have enough money you could pay for everyone’s food, 30% remember?'”

“I was fuming inside. Instead of reacting negatively and losing my temper. I waited til the bills arrived (they were already split from the start when we first ordered). I paid for mine then I excused myself to the restroom. I then sneaked out from there, got into my car and went home.”

“I started getting phonecalls from my fiance then texts asking where I was. I texted back saying I didn’t appreciate how he put me in this situation and basically tricking me into paying for his and his friends food. I told him I went home then stopped replying. An hour later he came and started yelling at me calling me selfish, irrational, cheapskate and childish for sneaking out like that and leaving him stuck with a bill he could not pay (He had to call his brother for help). We had a loud argument then he walked out. His friends didn’t speak to me on this but he told me they’re disappointed in my behavior and are telling him to take time and ‘reflect’ on the type of woman he’s gonna be married to. AITA for what I did? Is what he’s expecting from me fair or justified?”

While sneaking off isn’t the best way to address a situation (she should have stood up on the table and screamed, to be honest, but I get it), this woman’s fiancé is a complete turd and she needs to “reflect” on the type of man she’s gonna marry. He’s abusive and using finances as a way to control and harm the OP.

“I bet his friends didn’t say that, not unless he lied to them in the first place. NTA unless you’re planning to stay with this dishonest, abusive user. I’m so BORED of men calling women irrational when they don’t do as they’re told,” said

“RUN!!! DO NOT WALK. RUN. RUN AWAY. RUN VERY FAR... You are engaged to a massive mooch who has surrounded himself with mooch friends. They are a pack of mooches. Why does he expect you to pay for him and his friends because you earn more???? Why aren’t they paying their way???” asked

“Why are you still engaged to him. You set a boundary. He ignored it. Then he continues to put you in situations where he assumes he can embarrass you enough that you will do what he wants. When you don’t comply he loses his sh*t on you. That is absolutely horrible, and I can’t believe you are even considering that you may be the a**hole here. He is a grade A a**hole, and all too happy to take advantage of you financially and pressure you into doing things you don’t want to do and trying to use social situations to manipulate you. I would not be able to marry someone knowing they had this quality – it displays that he has really poor character and would be a huge dealbreaker for me,” said

“NTA. You need to dump your fiance. Why are you with someone who holds your success over your head and considers it his personal mission to ‘equalize’ your take-home by running up your expenses?This is abuse. Please get help – you need to get to a safe place, and get out of whatever lease you have, because the engagement is when things are easy and fun! When you’re married with kids and there’s a ton of responsibilities and expenses are when things get hard – and he will only get worse. Much worse,” advised