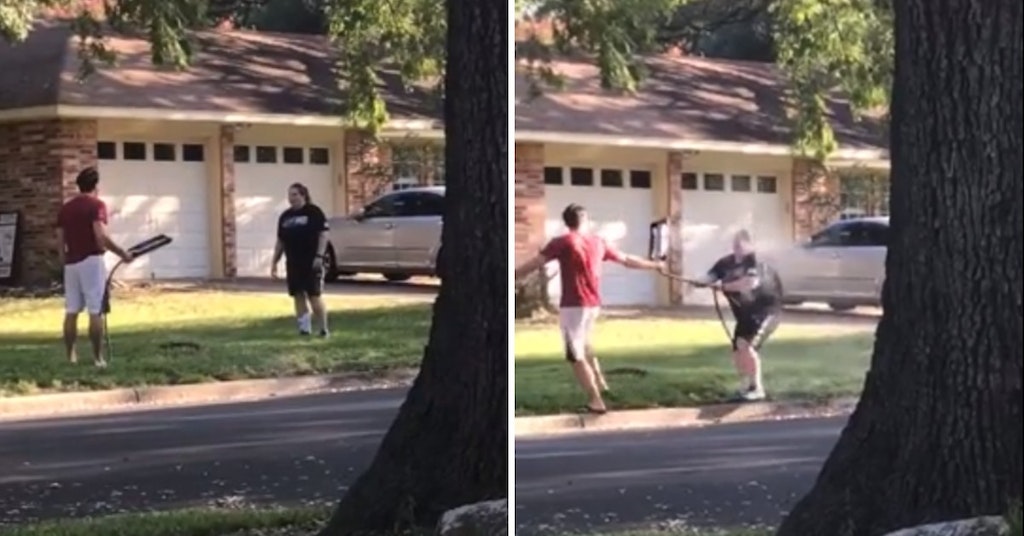 
A woman who apparently took issue with a Black Lives Matter lawn sign got a thorough soaking after one man decided he’d had enough of her antics. According to the man, who posted video taken by his neighbors of the incident on Reddit, she parked her car in front of the home with the sign and screamed “white lives matter” in the street for a full half an hour before he decided that he needed to “put the hose on her.”

"My neighbor has a Black Lives matter sign in her front yard. Some crazy lady parks in the middle of the street and starts screaming 'White Lives Matter' for half an hour," he wrote. "Had to put the hose on her."

As the video starts, the man appears to already be threatening the woman with his sprinkler, demonstrating how far it can spray and warning her not to step onto his property. The woman does exactly that, telling him to "turn that damn thing off." After some additional warnings, the man finally lifts the sprinkler up and sprays her, resulting in a brief chase as she tries to grab it from him.

As those with siblings likely understand, it's very difficult to get a water-spraying device away from someone willing to spray you to keep it. The racist woman gets completely soaked as she tries to grab at the hose, stumbling multiple times, and the women filming the incident laugh.

As the filmers discuss calling 911 to report the fight, the "white lives matter" woman gets her hands on the hose but just ends up getting literally dragged as the man runs from her.

"Please get off my property!" the man shouts as he dodges her.

The comical display unfortunately ends shortly after that. The Reddit user didn't say how it ended, but we can at least assume he survived to post the video. For this, other Reddit users are thankful.