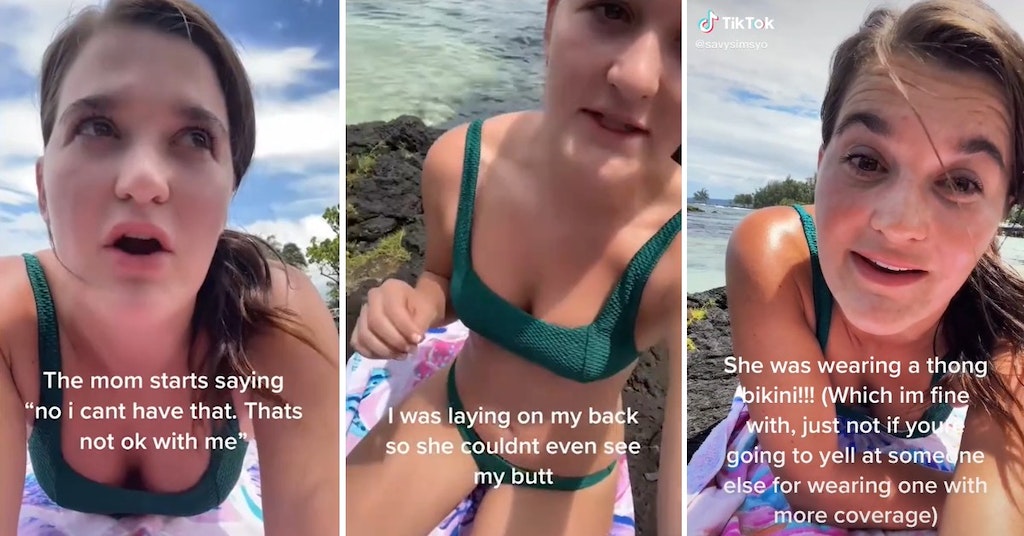 
A visitor to a beach in Hawaii says she was rudely interrupted from her sunbathing by a nearby mom who suddenly had a problem with the young woman’s swimsuit, which was a pretty standard two-piece to see in the area but that seemed to offend the other lady. In a viral TikTok video, Savannah Sims describes this woman claiming to suddenly vocalize a problem while Sims was minding her own business.

“I look up and she’s looking at me,” said Sims. “So I asked if there’s an issue and she says she doesn’t want to be seeing my butt and lady parts.”

The original videos have since disappeared from TikTok, along with Sims’ account, but the New York Post still has a recording.

According to Sims, she was even there first, with the family arriving and settling down near her before the mom started to complain about her swimsuit. Sims was kind enough to ask what she could do to cover up, trying to be respectful of the young child playing nearby, and was instead told to just leave.

The kicker to this story comes in a follow-up video, which does still exist on TikTok, in which Sims says she saw the mom get up later and take off her skirt to reveal a much skimpier swimsuit than Sims was wearing that day.

“She’s wearing a straight thong bikini,” Sims says. “Which is totally fine, I wear those all the time. But to call me out and then take off your skirt and be rocking a G-string. Either she’s a hypocrite, or it wasn’t about what I was wearing.”

It remains unclear what this lady’s actual problem was and why she and her family couldn’t move themselves if they had an issue with Sims being near them, but many commenters including those who live in Hawaii have come forward to supports Sims and report that they have experienced similar harassment from entitled tourists. Many others also seemed to have the same idea about why the woman really wanted Sims to leave.

“Mmm looks like you’re in Hilo,” said one local commenter. “Most likely, her bf was checking you out. People can be jealous there. Sorry for the bad vibes. We mostly pretty chill.”

Others speculated that the mom and her family were local to Hawaii and doesn’t like tourists. To be fair, indigenous Hawaiians have every right to be irritated with white tourists to their islands, but it’s unclear whether the mom in this story was local or indigenous, or if she was another tourist.

“You should have never left!!” wrote another commenter. “Nothing is wrong with what you have on and if she doesn’t want her kids/hubby to see the flesh STAY HOME!!!”