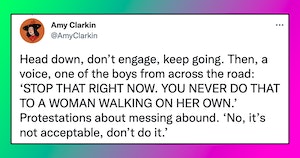 If you’re a woman walking home alone at night, you know the deal. You might put your headphones in but not play anything so people think you’re not listening to them. You probably place a phone call to someone so you can “walk with them.” You might have your keys in your hands so you can defend yourself with them. You’re probably mapped your route ahead of time, choosing the brightest or most populated streets. It’s exhausting!

So when one Twitter user shared her experience of walking home alone at night and what the intervention of one stranger can do, it went viral. Clearly, lots of women can relate.

“I genuinely do not think a lot of cis het men fully understand the power that them simply telling their friends ‘hey, that behavior is not ok’ can wield,” Clarkin began her thread.

“I’m in Edinburgh for a friend’s wedding. I left at 10pm to head back to the apartment. It was still bright, my walk along 2 busy main streets & 1 quieter but wide & safe feeling street (all the assessments I’m used to making as a woman going anywhere on her own) so I walked back,” she wrote.

“It was 10 minutes away & though I was tired I knew I’d be okay to make it. So I took out my cane & started walking, promising my friends I’d message when I arrived & letting my sister (in Dublin) I was walking now. All precautions that sadly are a usual part of going anywhere alone.”

Clarkin wrote that her walk started off fine, but she eventually runs into a group of young guys who have been drinking. They are walking behind her, and she begins to get uncomfortable.

“Head down, don’t engage, keep going. Then, a voice, one of the boys from across the road: ‘STOP THAT RIGHT NOW. YOU NEVER DO THAT TO A WOMAN WALKING ON HER OWN.’ Protestations about messing abound. ‘No, it’s not acceptable, don’t do it.”

The boys actually changed their behavior and apologized. “I was so taken aback I hope I smiled, but it may have been more of a surprised grimace,” Clarkin wrote.

Concluding her thread, Clarkin said, “We shouldn’t have to deal with this. We should be able to walk alone without checking the route, the light, letting multiple people know when we’re expected back. But we do. & every time someone tells their mates ‘that isn’t acceptable’ we get a little closer to not having to.”