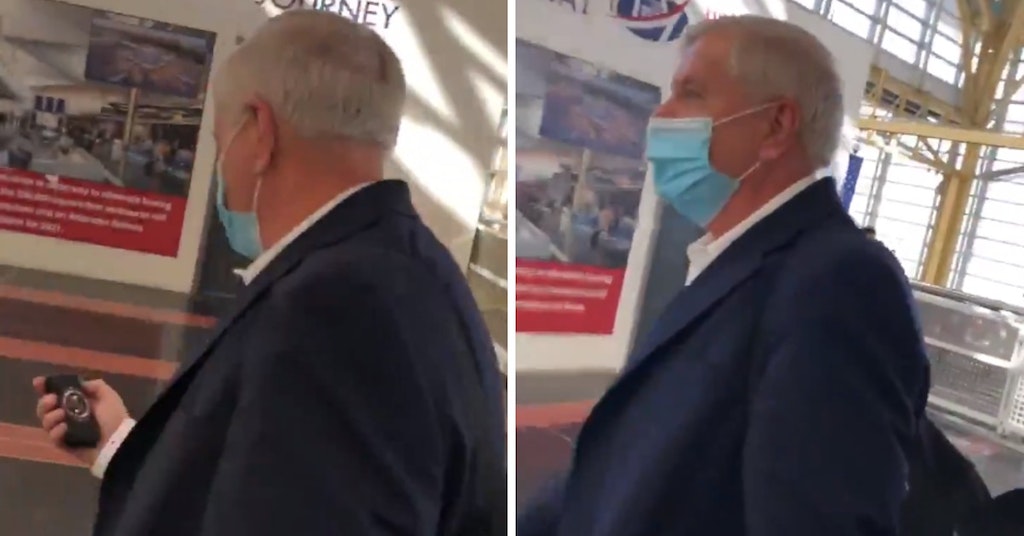 
Two women spotted Senator Lindsey Graham, chairman of the Senate Judiciary Committee, at the Ronald Reagan Washington National Airport in Virginia on Monday and confronted him for his work pushing Amy Coney Barrett onto the Supreme Court. Graham posted video of the encounter himself and called the women “hostile & unhinged” for daring to speak with him in public.

Graham also noted that one of the women was from Seattle, Washington -- one of the cities designated an "anarchist jurisdiction" by the Trump administration.

The woman from Seattle can be heard telling Graham to look her in the eye as the video starts, which is when the senator asks her where she's from.

"Why does it matter where she's from?" the other woman asks. "She's American."

"Well Seattle's a good example of how things are getting out of control," Graham claims.

"No, Seattle's wonderful," the first woman says, "Don't you dare say that about my city!"

"Sir, you're an example of how things are getting out of control, sir," says the second. "You work for me, sir. I pay your salary, sir."

At this point, Graham asks the second woman where she's from, which she refuses to answer other than "I'm from the United States of America."

Graham and his cronies continue to hustle up the escalator and through the airport as fast as they can, almost as though they're afraid of these two ladies asking them questions. Apparently, this is what Graham thinks anarchy is.

The topic turns to Amy Coney Barrett as the woman from the United States of America brings up her kids.

"And you're gonna make my children, my daughter, who stood on the shoulders of giants, you're gonna take her rights away by voting for this woman who's a racist?" she asks.

The video ends just after Graham calls Barrett "highly qualified," which she objectively is not, having spent only three years as a federal judge. He posted the video claiming "I won't be intimidated," which definitely suggests that he felt intimidated by two women while surrounded by a cadre of men.

This airport hustle is far from the worst that a Trump ally has had to endure, with others having been driven from restaurants as people shouted them out. None of that, however, is nearly as bad as dying from COVID-19 or an unsafe abortion.