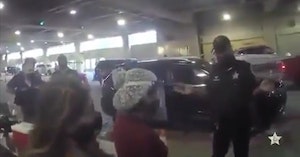 Florida Women Caught Dressing As “Grannies” To Get COVID-19 Vaccine

Two women in Florida, ages 34 and 44, were discovered in their plan to skip the line for the COVID-19 vaccine by dressing up as old ladies, complete with gloves and bonnets.

In the U.S., most states are still in the phase in which only individuals over the age of 65 and other highly vulnerable populations can receive the vaccine, but apparently the unnamed women didn’t want to wait.

Their plot has now been exposed to millions after video of the pair getting a well-deserved lecture by police deputies went viral.

“You know what you have done?” said the officer. “You have stolen a vaccine from someone who needs it more than you. And now you’re not gonna get your second one. So that’s a whole waste of time you just wasted here on this.”

Both women received their initial vaccine without getting caught, somehow, but were discovered when they came in to get the follow-up shot. Without the second vaccine dose, their first one was essentially wasted.

According to NPR, the women came to the hospital dressed as “grannies” with “the bonnets, the gloves, the glasses, the whole thing.” Though perhaps the only case of vaccine fraud that was caught on video, Florida Department of Health Director Dr. Raul Pino had said that they have not been the only ones who tried to skip the line.

“We haven’t had any lack of willing arms to get vaccinated,” he said. “We also have people faking to be old to be vaccinated.”

He mentioned one case of a man under the age of 65 trying to get a vaccine by exploiting the fact that he has the same name as his elderly father. With how busy the vaccine clinics have been, Pino admitted that the number of people who have gotten away with a vaccine they didn’t qualify for is “probably higher than we suspect.”

The two women in the video were issued trespass warnings at the request of the health clinic where they were caught because somebody took a look at their drivers licenses. Those who are patiently waiting for their turn are pretty furious that the pair wasted two doses with their selfishness.