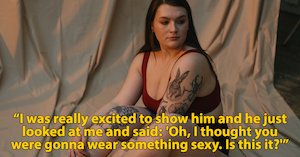 Being naked with someone can make you feel really vulnerable! Whether it’s a new or old relationship, it’s always nice to have someone appreciate your body and tell you something kind about it. Unfortunately, a lot of folks are really dense or rude or just cruel.

On Reddit, women are sharing the best and worst reactions to someone seeing them naked — and a lot of their stories are really wholesome and affirming.

“So my husband and I have a thing we do. Every time one of us says I’m gonna go get comfy/extra comfy, the other somehow manages to race up the stairs, jump into bed and fluff the pillows and prepare for a show. Sometimes its nothing more than just jumping on the bed and just watching the other get undressed and into pj’s. I always gave him compliments waiting to find the one that will make him grin and blush, so far I only get the grins and him telling me I’m full of sh*t or yeah right. When he does this for me he does make me feel beautiful, after the kids and weight gain he still looks at me like I am a work of art. And the entire encounter cannot end without someone’s a*s getting slapped.” —

But there’s always going to be some partners who just do not get it. And you know what? They don’t deserve you!

“In my early, very self-conscious twenties, guy I was hooking up pleaded to have me strip for him. Told me he just wanted to enjoy me. I was deeply nervous but acquiesced. He studied my naked body for a few seconds, put his head to one side and said, ‘You know, you’d probably have a really attractive hourglass figure if you just lost all that weight.'” —

“The most memorable to me was when this guy was taking off my shorts/underwear and he did this almost inaudible gasp and bit his lip and told me how sexy I was. It was nothing major I guess but it stuck with me.” —

“Just today I was in the shower at the hospital, almost 4 weeks postpartum. He was watching me in case I needed help as I’m in with gallbladder problems. I said, ‘I’m so sorry you have to look at me,’ he responded, ‘There is nothing else I would rather be doing.'”

In the beginning of my relationship with my boyfriend, I was over by my closet undressing from whatever clothes I was wearing to more comfy clothes to watch a movie. I look back across the room and I just see him watching me biting his lip. I said ‘why are you looking at me like that?’ And he said (in that shy tone) ‘I don’t know. You look really sexy.’ And then I don’t remember what happened after that, but it was probably sex.”

“Had a guy premature ejaculate the second he took down my underwear. He was embarrassed but I took it as a huge compliment. Wasn’t long and he was ready again.” —

“I was hooking up with a guy I talk to and I was on top while we were having sex, and I’m somewhat self conscious about my body so I had my shirt on. He kept begging me to take it off saying I was sexy and he wanted to see all of me. I reluctantly did but when I did he couldn’t keep his eyes off me and he said I was so beautiful and I felt his dick get harder after I took it off. Huge ego boost for me lol.” —

“I was way too young when this happened but it was my first boyfriend. He was also young and stupid. He didn’t know what he was saying, hence waiting is always better. I bought a new underwear set. First set I bought. Before it was usually sports bras and granny panties. It was white with small black polka dots. I was really excited to show him and he just looked at me and said: ‘Oh, I thought you were gonna wear something sexy. Is this it?’ Pierced like a knife.” —

“Not naked, but when I was 8 months pregnant I went with my husband (now ex) and my two boys to the pool. I took off my shirt and shirts and I was wearing a bikini. I thought I looked amazing and was confident as could be even for being that far along. My ex took one look at me and was like ‘Your belly looks weird and freaky.’ I had an umbilical hernia so my belly button stuck out a little more than usual. My face and confidence just dropped. I walked away to the kiddie pool with our toddler. An older woman there apparently had overheard what happened and she looked at me and said ‘You look absolutely gorgeous.’ So the worst and best all at once. It didn’t make me feel better, but I thought she was really sweet to try. After that, no more bikinis for me for years.” —

“I’ve gotten some good reactions, but the absolute worst was from my darling husband. I undressed, he looked me up and down and said, ‘Oh no! Did the dog jump up and scratch you?!’ as he pointed at the stretch marks on my hip.” —

“The absolute worst was when I got up to take off my clothes and get to it and my situationship at the time decided to say ‘man, if my grandparents knew I was hooking up with a Black girl…’ like we are both naked, who says that?! I’ve told friends and they are still shocked. Yes, he was white.” —

“I had just gotten out of the shower and got into black bra and underwear when my dad tried coming into the bathroom. He saw me in my matching undergarments and told me I look good in black. I no longer own any matching or black undergarments.”

“At Scout camp the boys looked at us through our cabin window while we changed. They pointed, laughed, gestured, and insulted us. The leaders solution was to put trash bags over our window, you know rather than punish the boys.” —

“I was getting undressed in front of my bf in our bedroom, and it was winter, so I was wearing a lot of layers. Like a lot. So I kept taking off layers and it was taking forever and we just started laughing at how I kept going. Then I took off my pants, and I had forgot I had layered leggings underneath and we just broke out in a huge laughing fit lol.” —

“‘Your boobs are much bigger than they look in clothes’ (I usually wear oversized T’s) lol. Can’t tell if the best or worst.” —

“Best would probably be ‘you should make an onlyfans’ haha.” —