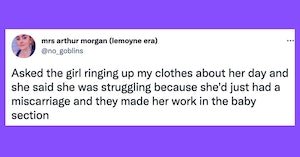 Talking openly about miscarriages is still pretty taboo, even though it is a common thing to happen. Most people who have had children have also experienced a miscarriage. Feelings around the subject are different for everyone, depending on their unique circumstances, but this story shared by @no_goblins on Twitter has brought out a lot of sympathy and sharing online.

The tweet says, “Asked the girl ringing up my clothes about her day and she said she was struggling because she’d just had a miscarriage and they made her work in the baby section.”

There’s a lot to unpack here—the pain of loss, the inability to take time off to properly grieve, the cruelty of capitalism and of this woman’s managers in particular. But the tweet opened the floodgates for other people who have gone through miscarriages to share their stories about having to work while going through it.

One woman explained how she had to work on Mother’s Day, and cried every time someone wished her a happy holiday:

A lawyer said she had her baby pass at seven months, and when she had to change her deposition time, the other lawyer called her a “human coffin.”

A photographer said she tried to reschedule a maternity shoot after her miscarriage, but ended up having to go through with it:

But just having to come into work at all after a miscarriage seems to be the most common story:

There are so many awful stories here about an often invisible topic, and while they’re brutal to read, they bring to light how much more work there needs to be done around education and compassion for miscarriages. And also employee rights, healthcare—so many things encompassed in one discussion. And it’s the right season for it: