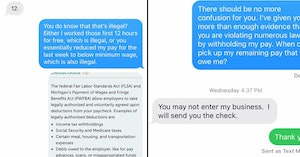 In a popular entry to the famed “Antiwork” forum on Reddit, a text conversation shows a worker literally educating their former boss on labor law after the business owner tried to deduct their training shift hours from their final paycheck. This is another example of the insidious and widespread problem of wage theft, which far outstrips other actions that people are more willing to think of as “stealing,” but is rarely if ever punished with jail time even as we throw petty shoplifters behind bars.

This business owner attempted to steal nearly half of a worker’s final paycheck, arguing incorrectly that she had that right because the worker quit her job within three months of being hired. Once you read the whole conversation, it’s not hard to understand why the OP quit so soon.

After the OP texted their former boss to inquire about a light paycheck, she claimed that part of the training manual stated that quitting before three months after hire meant they had to reimburse her for the training shift.

“Also per the training manual on page 1, due to the extra cost for training, if someone leaves before 3 months from their first day, they are required to reimburse [redacted] for their training,” she said.

After confirming that 12 hours were deducted from their final paycheck, the worker informed their former boss that what she was doing was blatantly illegal.

“You do know that’s illegal?” they wrote. “Either I worked those first 12 hours for free, which is illegal, or you essentially reduced my pay for the last week to below minimum wage, which is also illegal.”

The business owner still attempted to weasel out of paying, claiming that courts have held that employers can demand reimbursement from their employees for training periods in situations like this. However, she conveniently left out the list of steps that bosses need to take in order to make this a legal practice, and the worker had to explain that she did not follow said steps.

“Firstly, you were supposed to give me written notice 1 pay period prior to doing this,” they explained. “Second, you needed written consent in order to deduct the wages each time, and third, saving it all until the last paycheck has reduced my pay to below minimum wage which is illegal.”

The worker further expressed regret for agreeing to work on that final week after their boss “begged” them to do so in spite of the difficulty that created for them, and called the business owner’s actions “disgusting.”

After further outlining why her actions were illegal and posting information from the U.S. Department of Labor, the worker finished by letting her know in no uncertain terms that she would be coughing up the money for those 12 hours.

“There should be no more confusion for you. I’ve given you more than enough evidence that you are violating numerous laws by withholding my pay. When can I pick up my remaining pay that you owe me?”

Did their former boss thank them for this free education into state and federal labor law? Of course not. Instead, she got mad about it and banned them from their former workplace.

“You may not enter my business,” she said. “I will send you the check.”

This was good enough for the worker, but the Antiwork commenters have something more to say about this attempted thief, who may have successful stolen wages from her other workers.