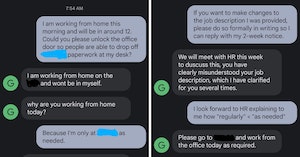 A recent entry in the Antiwork Reddit forum is resonating with a lot of job seekers who have found that a shockingly large proportion of job ads right now are straight-up lying to prospective employees, whether about pay, benefits, or the option to work from home. In this particular story, the Reddit user says they were told that they could work from home on a regular basis and only had to come into the office “as needed”— an attractive benefit during a seemingly never-ending pandemic.

After getting the job, however, the employer was suddenly singing a different tune.

“After learning on Day #1 that ‘as needed’ meant M-F 9-5, had to pull teeth to WFH T/Th,” they wrote in the post headline. “Expressed my concerns a couple of times to no avail before putting my foot down. Felt good.”

This final confrontation happened when the Reddit user tried to work from home on another day than Tuesday or Thursday and was asked why they were doing so, repeating what was described in the job ad to their boss. The employer responded by insisting they had told their new hire that “as needed” was somehow code for “every Monday, Wednesday, and Friday.”

“[N]o, that is not what i told you – you are expected to be at Marcus 9am-5pm Mon, Wed, Fri, working at home Tue and Thu,” the boss texted. “I cannot cover you all the time.”

Since this would appear to be an office job and not a coffee shop, it’s unclear what this employer would need to “cover” for if someone decided to do their work at their home office instead. The Reddit poster seemed to feel the same way, judging by the sarcasm dripping from their response.

“If you want to make changes to the job description I was provided, please do so formally in writing so I can reply with my 2-week notice,” they said.

“We will meet with HR this week to duscuss [sic] this, you have clearly misunderstood your job description, which I have clarified for you several times,” their boss replied.

“I look forward to HR explaining to me how ‘regularly’ < ‘as needed.'”

After being ordered to go in to the office, the worker responded with a simple “I quit,” and the employer pulled what has become a very predictable move, as ineffective as it would seem to be.

“You will need to give two weeks’ notice, and I think you should discuss this with me before you make hasty decisions without proper reflection,” the manager said. “This is not necessary.”

To be clear, a worker is never required to give a two weeks notice to an employer unless specifically stated in the employment contract, and even then such a clause would be difficult to enforce. A two weeks notice was only ever meant to be a courtesy to an employer, with the underlying implication being that the notice is in exchange for a hopefully favorable job reference in the future.

However, a surprising number of Antiwork posts feature managers who try to imply that it’s required by law. It’s not, and it never has been. What’s also predictable is the backpedaling, with bosses often warning workers who quit not to “make hasty decisions” as they try to reel them back in because hiring replacements costs time, energy, and money.

Thankfully, this Reddit user was having none of it.

Antiwork commenters widely issued their approval of the OP and expressed irritation with the frequency of bait-and-switch job ads.