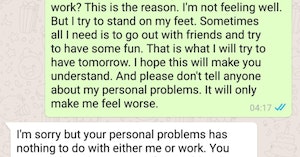 Worker Quits After Boss Dismisses Mental Health Needs, Tries To Force Them To Work Day Off

Another post from the hit Reddit forum Antiwork is being highlighted for showing yet another terrible boss who lost a worker due to old and toxic expectations that people throw their mental health in the dumpster for the sake of the company taking the majority of the value from their labor.

As has become a pattern among these posts, the boss starts by “asking” the worker to cover a shift, then starts demanding it when the answer is “no,” then ends up throwing the whole thing into reverse when the worker quits in response to this abusive treatment.

Because another employee became ill and the Reddit poster was the only one in town available to cover, this boss was desperate enough to shoot them a message at four in the morning because they were, for some reason, online at the time and therefore assumed it was time to be a terrible manager.

The worker’s first mistake is to give the boss any reason for why they can’t cover the shift, which was to start in just five hours. Although many workers feel like they have to, there is no reason to tell a manager why you are unable to come in, whether you’re calling out or refusing to cover, and bad bosses will often decide it’s their job to decide whether your reason is good enough.

This worker shared that they had all-day plans with friends for the coming day, and this manager decided that this was frivolous without knowing the full story.

“I understand that you got plans for tomorrow but at moments like these I really have you to show up,” says the manager. “I’m sorry you have to cancel your plans with your friends.”

This is a common trick by bosses characterized by originally framing the request for a worker to cover the shift as just that—a request—and then when denied acting like it’s a requirement and an inevitability to try and cow the employee into coming in anyway. Everybody hates it, but it’s not easy to stand up to one’s boss and risk a job. Unless, of course, you’re willing and able to quit.

This worker was willing to give the boss another chance, asserting again that they would not be coming in and pointing out the late hour. The manager then complained about their employee’s “attitude” and tried to blame them for daring to be awake at an unusual time. When the worker doesn’t budge, the boss threatens to replace them.

“I am pretty sure that there are many young people who can perform the same tasks as you and in addition also be able to change their plans depending on the situation,” they said. “If you do not show up in the morning, the two of us will have to have a meeting when you show up on your normal work day.”

Undeterred, the worker called out their manager on the real message sent by threats like these.

“Telling me their are other people that can do my work to [sic] makes me feel like my work is useless,” the wrote back.

Under ongoing pressure and threats from their manager, the worker finally admitted that the reason they needed their day off was due to mental health issues including depression and anxiety that had plagued them for over two years. Unfortunately, as is common, the manager didn’t consider mental health problems to be a reason to miss work even though physical health issues are.

“I’m sorry but your personal problems has [sic] nothing to do with either me or work. You are not the only person in the world with depression and anxiety.”

That was the moment that another bad manager lost an employee.

“It was very difficult for me but I opened up and told you what problems I have in life. But what happened? You showed me that you don’t actually give a s–t about me,” the worker said. “Stop trying to make depression and anxiety sound like a normal thing. It is a major reason people are committing suicide and you just stand there trying to make it sound like it’s normal. I will not be there in the morning or any other day because I quit.”

As always, the manager changes their tune real fast.

“I think there has been some misunderstanding here. Let’s have a talk on your next shift. I will try to find a solution for tomorrow.”

They would have to, because that worker is not going back to that job, to the joy of Antiwork Redditors.