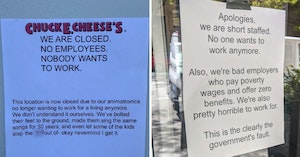 Fed-Up Workers Are Making Their Own “No One Wants To Work” Business Signs, Plus Memes

As businesses reopen across the U.S. and more people begin to venture out of their homes again after getting vaccinated, the nation has been hit with a fairly significant staffing shortage, with signs popping up outside of stores and restaurants everywhere asking customers to be patient.

Many of these signs also claim that “no one wants to work anymore” and the people who make a profit from the labor of the working class are pushing the idea that increased pandemic-era unemployment benefits are to blame.

The workers themselves, as well as those who have been in highly exploitative jobs like these before, have countered by saying that if businesses want workers, all they have to do is pay enough and offer some basic benefits. Business owners are now facing a new problem—an internet full of memes mocking them for whining that no one wants to endure horrible conditions for paltry pay anymore.

Not only memes, but people are coming up with their own signs to post outside of businesses that refuse to pay a living wage to their exhausted workers that explain the real reasons for the staffing shortages. One of these lays out the many humiliating hurdles people have to jump through just to apply for jobs like these, while others opted for pure weirdness, like the one that claims there’s a demon in the Wendy’s fridge.

Some are calling this phenomenon a new labor movement in the U.S. Personally, we hope to be witness to history’s first general strike that was precluded by a mass amount of internet memes.