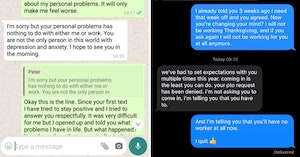 As the world slogs through year three of a global pandemic (yes it’s still here) and watches what could become World War III develop if we’re not careful, and while the price of everything continues to skyrocket, work continues to suck.

Pressure from all sides has caused entire masses of workers to snap and quit their awful jobs, chucking old sentiments about professionalism out the window after years of being treated like garbage by exploitative companies.

People fed up with the old ways of thinking about work—which was basically to expect to be treated terribly by both customers and management and get paid less than a living wage in return—gathered together into a new labor movement. Many did so online, with the Reddit forum “Antiwork” exploding into popularity even as it suggested attitudes on the topic that are considered quite radical, at least by U.S. standards in the 21st century.

Growing up here, you might think that you could get in serious trouble for not even quitting a job in the “proper” manner by providing a certain number of weeks as notice in a polite and formal letter. In reality, this was only ever done out of courtesy and a hope for a good reference from future employers. But, if you’re not likely to get this anyway or you don’t need a reference from Wendy’s , you are absolutely free to quit your job in any manner than you please, including via text message.

To be clear, your managers will probably be angry if you do so, especially without notice, but it’s up to each individual to examine how said manager has treated you and whether or not they deserve any courtesy on your end when you no longer need a paycheck from them.

In continuing celebration of everyone standing up and demanding what they deserve for the work that they do, here are some of our favorite quitters from recent years who lived the dream with no regrets:

1. Guy with a broken foot who works better while sitting down anyway:

2. Worker who put mental health before a job that didn’t care about its employees’ well-being.

3. Person who did not appreciate being lied to about the supposed work-from-home option.

4. Brandon, who decided it was not his problem that his workplace is understaffed.

5. Worker too busy mourning their father to put up with this nonsense.

6. Hillary, whose old boss can “eat s–t” for berating her while her sister was dying.

7. Raychael, who is utterly done being screamed at.

8. Ellie, who was only asking for a reasonable amount of people to help her do her job.

9. Person who just doesn’t need the health insurance that badly.

10. Will, whose former boss thinks going to support a sibling ahead of their surgery is a “b—h move.”