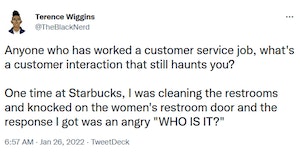 Workers Share The Customer Interactions That ‘Haunt’ Them To This Day

Nothing can bring people together quite like customer horror stories. Or even just “customers can be the weirdest people on the entire planet” stories. Working in retail or service jobs, in particular, can make it nearly inevitable that you will witness someone being utterly ridiculous, getting enraged over nothing, or just doing something so baffling and counterintuitive that you will think about it on a regular basis for the rest of your natural life.

On Wednesday, writer and podcast host Terence Wiggins kicked off a fun sharing session by asking former customer service workers to share “a customer interaction that still haunts you.” He kicked things off with his own story.

“One time at Starbucks, I was cleaning the restrooms and knocked on the women’s restroom door and the response I got was an angry ‘WHO IS IT?'” he wrote.

Wiggins later lamented in a follow up tweet that a lot of responses were less “fun-horrifying” and more “that was a traumatizing experience and you should maybe talk to a professional about it.”

We kept the really raunchy examples out of our list to protect the innocent: