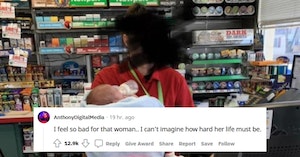 An image of a woman working at a gas station cash register while carrying a very young baby along with a social media post calling her an “inspiration” has resulted in a wave of online backlash against this sentiment, with many thousands panning the scene as an indictment of the state of U.S. society. The woman’s face is obscured in an image that landed on the “Antiwork” forum on Reddit as she appears to feed the newborn with a bottle in one arm and ring a customer up with another with a display of tobacco products stacked up behind her.

This is not the first time that someone has held up a scene of a worker having to do something ridiculous and likely good for nobody involved as being “inspirational” when in reality people are just doing what they have to in order to survive, and they should need to do these things at all. It’s not even the first time a post made the rounds that appeared to show someone actually having to care for a baby during a low-wage shift, but this one seems like it’s the real deal this time.

“The other day, I was in BP and I saw this lady,” reads the text of the original social media post. “She was the cashier. And she was taking care of her baby so patiently, so well, and so lovingly. All while working. Yet she was able to do her job and right quick I might add!”

Well, that’s the important thing, isn’t it? And not now the cashier’s arm must be aching or how much diesel fumes the baby is inhaling. Of course, there was a time when most new mothers were forced to work soon after giving birth or others had to work while carrying babies if they couldn’t, but we were supposed to have created some kind of society in order to put a stop to that kind of thing.

These days, however, we’ve let the practice resume and instead of viewing it as a failure of society, take photos of these poor exploited workers and call it “inspiration” for all those who will be forced to do the same while those rich enough to not have to use the whole situation to pet their own egos, somehow.

“Some may scrunch their faces in meaningless annoyance, some may judge,” the post continues. “But me, being the mom that I am, saw hope, inspiration, and motivation. But more than anything, a LOVING mom willing to sacrifice. I politely asked if she minded me taking her picture for motivation to other moms. She deserves recognition.”

She deserves paid maternity leave is what she deserves.

“They used to call it slumming,” wrote one Antiwork commenter. “The wealthy would dress up in rags and smudge their faces a bit, then venture into the seedier side of the city to gawk at the poor folk.”

For those subjected to these kinds of inhuman conditions, posts like this are the opposite of inspirational.