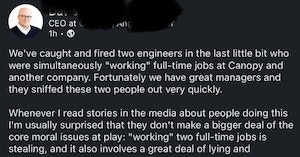 A CEO made a LinkedIn post that made it to the “Antiwork” forum on Reddit, and it’s no surprise that the post is getting torn apart there for the suggestion that someone working two jobs is engaging in theft against companies.

The CEO, whose name was redacted by the OP but says the company is Canopy so that must be Davis Bell, says that his managers caught two employees simultaneously working two full-time jobs.

While it’s obvious why this sort of thing would upset management and likely lead to firing, Bell followed up this announcement by claiming that this behavior is as bad as stealing from people, because companies are just like people, too. Who wants to bet that this guy supports the Citizens United ruling that declared corporations to be people so that they could donate more money to the cause of controlling politicians?

“We’ve caught and fired two engineers in the last little bit who were simultaneously ‘working’ full-time jobs at Canopy and another company,” writes Bell. “Fortunately we have great managers and they sniffed these two people out very quickly.”

Presumably, these two workers were either working remotely at one or both jobs and spent time they were expected to spend working at one company to do projects for both. There was no mention of whether they were effective at their jobs or anything about the quality of their work, just a long rant comparing what some might call impressive efficiency to stealing food from hungry children or something.

Bell went on to examine these moral implications, saying that “‘working’ two full-time jobs is stealing, and it also involves a great deal of lying and deception.” So does being a CEO of any large company, but we’ll just gloss over that.

“I guess some people feel that stealing from companies is less wrong than stealing from individuals,” he continued. “In reality, companies are owned by people – either directly, in the case of our employees, or indirectly, by the retirement funds that are invested in venture and private equity and investment funds that own companies. You’re stealing from those who are depending on you to get work done and whose careers ride on the success of the companies for which they work.”

Claiming that companies exist to help people or even allow them to live by doing the extremely basic thing of paying their employees is a classic way to try and shield them from any criticism or any attempt to make them treat their workers better. You can’t be mean to the giant corporation because if it goes under, all those people lose their jobs and suffer. It’s your basic hostage-style economic system.

With the combination of long-stagnated wages, skyrocketing costs of living, and the message that those in poverty deserve it because they should just work harder, it’s amazing to see CEOs come at people working two jobs at once like this.

“And finally, you’re very likely stealing a job from someone who wants and needs it,” Bell adds.

No thought to the idea that these workers might have felt working two jobs at once was the only way they could survive. Not only that, studies have shown that in the case of office jobs at companies like Canopy, workers only really do an average of three hours of work per day, often because there’s no actually enough work to fill the time. There is no mention in Bell’s post as to whether working two jobs at once was having a negative impact on their performance.

But God forbid workers ever game the system. That’s the job of the executive class.

Bell topped this off with a list of behaviors he says are red flags for double job workers, so that’s great for everyone who wants to maintain workplace boundaries. Now if you’re not immediately responsive to emails and enjoy some sense of privacy, you might get accused of “stealing” from the executives who pocket the vast majority of company profits and enjoy lives of abject luxury while people starve on the streets.