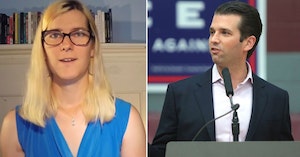 Rachel McKinnon, winner of the 2019 Masters Track Cycling World Championships and a trans woman, received a flood of hateful messages and felt compelled to defend her win after Donald Trump Jr. retweeted a Daily Caller article calling her a “biological male” with additional transphobic nonsense.

The son and presidential mouthpiece called her win “BS” and implied she only won because she’s transgender, claiming it will “destroy women’s sports.”

Anyone want to guess why???
This BS will destroy women’s sports and everything so many amazing female athletes have worked their entire lives to achieve.
I couldn’t care less how you identify, but this isn’t right. https://t.co/oxLQip9pqR

McKinnon has been competing as a cyclist and a woman for several years now, including in years when gender-based qualifications were more stringent. She also won the UCI Women’s Masters Track World Championship for the 35–44 age bracket in 2018 and this year set the world record during her qualifying time for this group.

In spite of taking hormone blockers in accordance with the rules, transphobes refuse to give McKinnon any peace. Don Jr. later tweeted on the same subject with an article that says McKinnon’s world record wouldn’t have qualified her for the men’s cycling championships, yet bizarrely used this as evidence that her wins are an assault on cisgender women.

Oh THIS explains the explosion of hate messages I'm getting!! https://t.co/4DTjkb1suB

Dr. McKinnon, who is also a Canadian philosophy professor, had to explain the basics to Don.

Pssst. I was competing prior to the IOC's 2015 update to their trans policy.

“My body doesn’t produce testosterone anymore,” she said earlier “And it hasn’t for nearly a decade.”

Unfortunately, McKinnon’s tweets have been flooded with transphobes, though plenty of other people have been supportive of her win and her message.

that’s funny coming from a guy that wouldn’t qualify to be a used-car salesman if his dad wasn’t rich.

Jumping in here to send you support AND congratulations on your win. Keep going! ????

For what little it’s worth, I’m trans-femme, and biking is the only form of exercise I’ve found I can do regularly between an autonomic condition & dysphoria.

Thanks for being someone I can look towards in the sport, regardless of my hobbyist interest in it.

It’s the commonality between these transphobes and these racists.

You’ve upset the order they feel is imposed by genetic predisposition.

They want all individual accomplishment to disappear and be replaced by hierarchy based on genetic predisposition.

You’ll be able to visit him and pa in jail soon, so there is that to look forward to ????