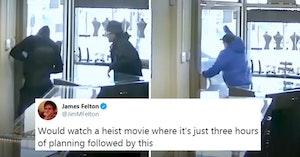 Footage of a hilariously botched jewelry store robbery by three men in London has gone viral after it was filmed and posted following the sentencing of one of the thieves to seven years in prison. The heist took place in spring 2019, but is getting a lot more notice now after the video was shared by popular comedy writer James Felton.

“Would watch a heist movie where it’s just three hours of planning followed by this,” Felton commented.

Would watch a heist movie where it’s just three hours of planning followed by this pic.twitter.com/pqEbtaLOKI

The footage begins with one of the three robbers entering and attacking the lone jewelry store clerk before the other two enter. However, the brave and quick shopkeeper manages to run into the bathroom and lock herself in after hitting the panic button, causing the shop door to lock from the inside.

This is some pretty serious bungling, but it gets funnier. The thieves realize that there is a door release button next to the register on the far side of the shop from the door. One of them hits it as another opens the door and leaves, allowing the door to close and once again lock the other two inside. 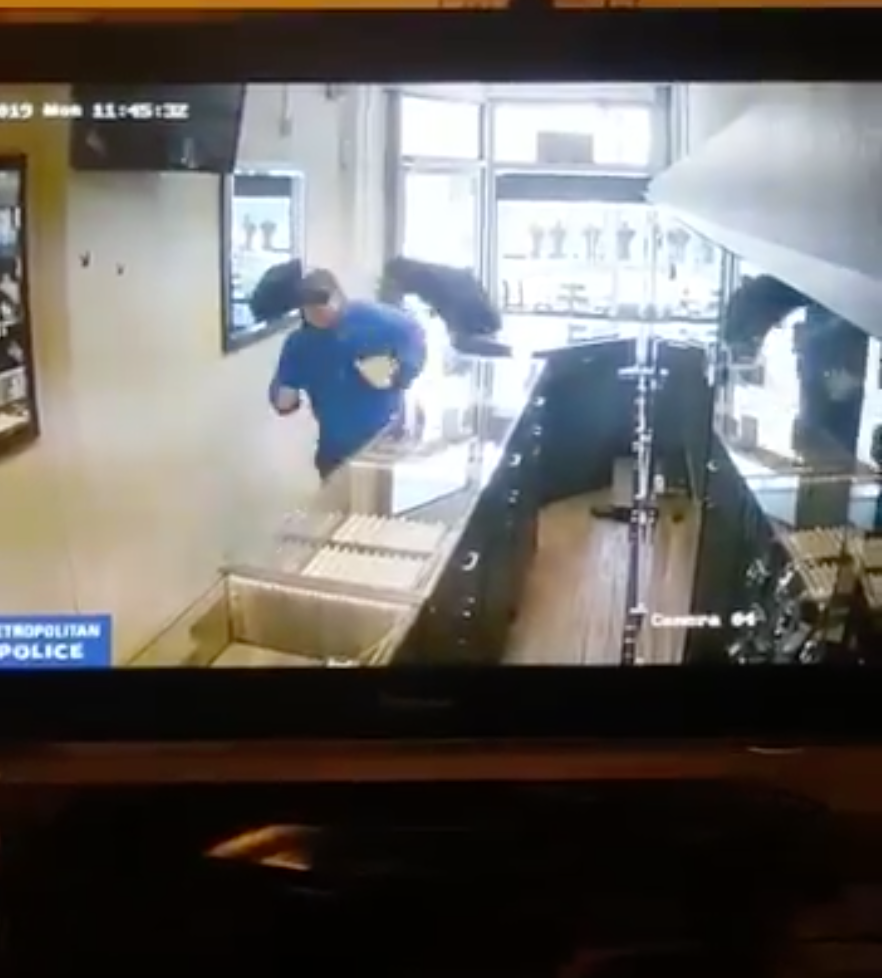 Panicked, with the alarm ringing and the police on their way, the first robber runs back through the cramped shop to hit the door release again, and his other accomplice runs out the door, again letting it close and lock with no one to help their rather slow and large friend out. He tries to hit the door release and run out himself in time, but is too slow, leaving him to furiously bang on the door.

Incredibly, the thief who was caught was not the man in blue, as a kind and perhaps slightly naive bystander opens the door for him from the outside, allowing him to escape as the individual filming this news report cracks up.

Two of the thieves remain at large, with the third only being caught due to the fact that none of them put much effort into covering their faces for the security camera.

“Their levels of planning were poor, to say the least. It was extremely poorly executed,” says Deputy Inspector Paul Ridley to BBC London. “How they were able to still manage to steal thousands of pounds worth of jewelry truly amazes me.”

It amazes all of us, Paul.

The trio managed to get away with £21,000 (approximately $27,300) worth of goods that day, leaving the two who didn’t get caught with a decent haul. However, now that the video is spreading, the two remaining thieves better lay low for a while, because they’re famous. The video has been viewed over 2.4 million times already and Felton’s post has gained many amusing comments.

Siri, show me a metaphor for Brexit.

“Larry! Keep the door open!”
“Hey, Mo! He let the door close.”
“I’ll press the button, you hold the door open, Curly.”
“See ya outside, Mo.”
~door closes~
“Why I oughtta!”#TheThreeStooges

Two still at large? Nice they’ve kept it open for a sequel.

Cold open of him banging on the door

‘You may be wondering how I got here. For that, I have to take you back to the beginning’

Prison officers: ‘Right lads, if you can co-ordinate and get through the jail door you can go free’!

As ‘thick’ as thieves

Here’s hoping these three plan more heists in the future.