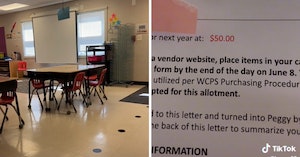 As the kids get ready to go back to school, one art teacher has made a rather depressing TikTok video highlighting the state of U.S. schools today and exactly how much our education system values the arts by sharing a simple number.

Teacher Hayley had just received a letter explaining how much the school would be providing her with to order art supplies for her class for the entire year, and it’s probably lower than even the low amount you’re guessing right now.

She later clarifies in a follow-up video that the amount granted was from the school she works with about a quarter of the time, coming in only one or two days out of the year. However, she states that this school has quite a bit more money than the one she spends most of her time teaching in, which is in a low-income area but still managed to get her $350 for the year. Even that seems like not enough, but it seems a lot better in comparison to what is Hayley showed in her viral video.

“You wanna see something sad?” she asks as she films a part of her classroom. “I’m an art teacher, and this is my allotment for art supplies for my classroom for this year. Fifty dollars.”

Considering what we know about average U.S. classroom sizes, $50 from a higher income school for all her students for the entire year sounds like not even close to enough. What is that, one bulk order of generic crayons?

The letter even states that teachers are not allowed to use Amazon if they want to be reimbursed for their purchases, even though this is very often the cheapest option for shopping for just about anything.

In the follow-up, Haley says that all she was able to buy her class with this $50 was two “stacks” of colored paper for her pre-K students. Literally, that’s all.

She also thanked those who offered to donate money or buy supplies from an Amazon wishlist, but said that she decided not to accept any donations because it might distract from her ultimate goal, which is to raise awareness about the school funding problem. Unfortunately, too many people might have accused her of scamming or only making her original video as a way of getting more supplies for her class, even though that’s a perfectly noble goal.

She assured viewers that although this year is particularly bad due to COVID and the economy, she’s faced lean years before and will reach out to the principal and PTA for additional support. She simply wants people to understand that this is what their children are getting for a subject that is deeply undervalued by a society that seems to love and cherish art at any time other than when funding its roots is in question.

Even more demoralizing are the comments on Hayley’s viral video, which contains multiple fellow teachers saying that their budget for art supplies has been literally nothing in the past.

“We have a budget of $0 so I feel you!” said one commenter. “I rely on scavenging and donations or using my own money.”

“My 7yo daughter came home from school telling me I can’t get rid of any cardboard because her art teacher was asking students for donations,” wrote another.