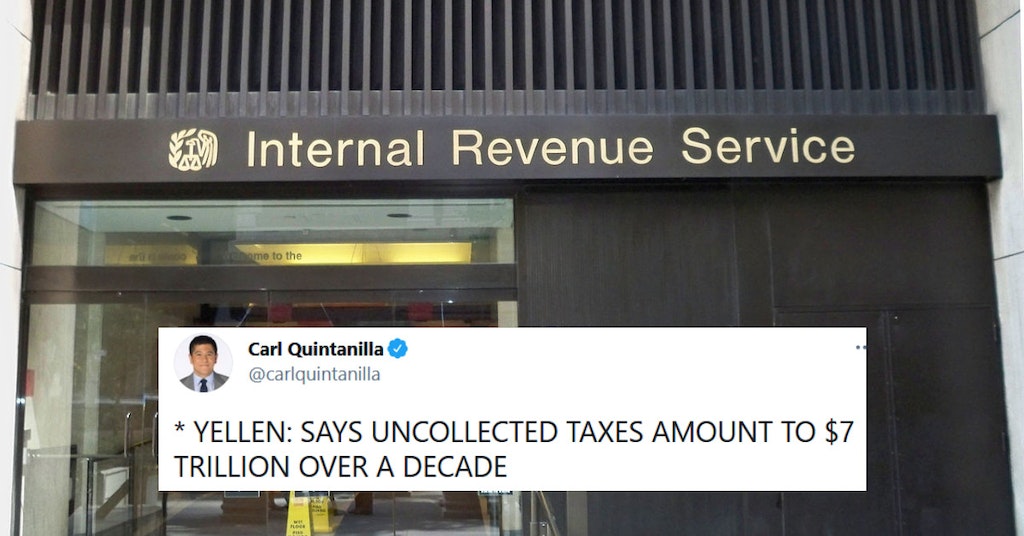 Janet Yellen: The US Will Miss Out On $7 Trillion Over 10 Years Due To Ultra-Rich Tax Dodgers

Treasury Secretary Janet Yellen called out the massive gap in expected and actual tax revenue for the U.S. at a “Future Economy” event hosted by The Atlantic Tuesday, saying that the missing $7+ trillion can be largely attributed to rich tax dodgers.

This huge number appears to be based on a paper written by former Treasury Secretary Larry Summers and economist Natasha Sarin and published in 2019, which estimated that between then and 2029, the country can expect to come up short by about $7.5 trillion in taxes from its citizens.

“It’s really shocking and distressing to see estimates suggesting that the gap between what we’re collecting in taxes on current tax and what we should be collecting — if everybody were paying for taxes that are due — that amounts to over $7 trillion over a decade,” said Yellen. “We’re trying to make meaningful steps to close that gap.”

The ultra-rich are well known for using loopholes, offshore accounts, and other accounting sorcery to avoid paying their fair share in taxes, resulting in the nation’s wealthiest corporations and individuals paying less in taxes than people close to the poverty line. In both 2016 and 2017, in fact, Amazon paid exactly nothing in U.S. federal income tax, leaving many average taxpayers feeling cheated.

This in combination with the news about how much money the country is set to lose over the next decade has reinvigorated calls to audit the ultra-rich. The report by Sarin and Summers states that increasing the number of audits done by the IRS, especially on the rich, would reduce that tax income gap by about 15 percent, gaining us an extra $1 trillion for things like infrastructure and maybe even healthcare.

Representative Ro Khanna of California used the news to promote his “Stop CHEATERS Act,” which would invest $100 billion into the IRS, which has been steadily defunded in recent years, in order to bring in $1.2 trillion in missing tax revenue. President Joe Biden has similarly proposed legislation to invest $80 billion into the struggling and essential agency. Yellen has already come out strongly in favor of this idea.

“A fairer tax code in exchange for a higher quality of life for most American families?” she said in response to Biden’s American Families Plan. “There are some economic trade-offs that are tough calls. This is not one of them.”

An extra trillion or so over the coming decade could pay for a number of rather nice things for the larger U.S. public, including tuition-free public colleges and universities, which would cost just $800 billion over 10 years according to the Brookings Institution. It could even come close to covering the $1.6 trillion in student loan debt owed by U.S. citizens if Biden should decide to pursue canceling it as he originally promised.